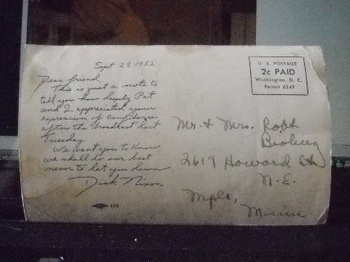 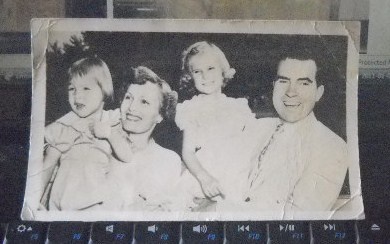 Dated September 29th, 1952, six days after his famous "Checkers Speech". After Eisenhower had named Nixon as his running mate in September of 1952, controversy began to swirl around Nixon and he had been accused of improprieties relating to a fund established by his backers to reimburse him for his political expenses. With his remaining on the ticket in jeopardy he went on television to defend himself. During the speech, he stated that regardless of what anyone said, he intended to keep one gift: a black-and-white dog, named Checkers by the Nixon children, thus giving the address its popular name. These postcards were sent out to his supporters afterwards. This one is addressed to my grandparents. It reads:

Dear friend,
This is just a note to tell you how deeply Pat and I appreciated your expression of confidence after the broadcast last tuesday. We want you to know we shall do our best to never let you down.
Dick Nixon.

Ironically, twenty years later to the day, on September 29, 1972 it was revealed that John Mitchell, while serving as Attorney General under President Nixon, controlled a secret Republican fund used to finance intelligence-gathering against the Democrats, part of the Watergate scandal that would ultimately lead to Nixon's impeachment and resignation.