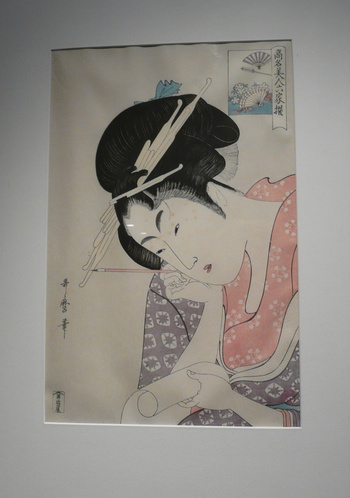 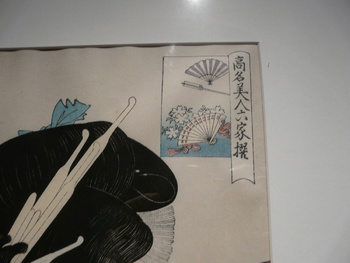 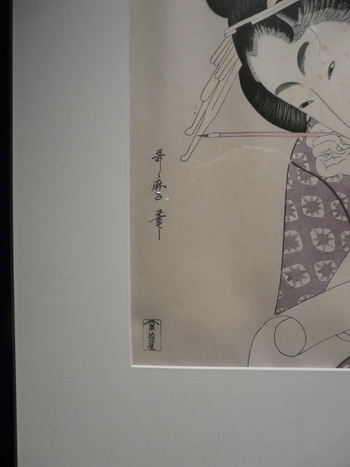 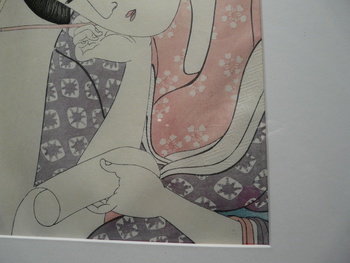 A twenty-first birthday present to my partner Paul from Lois McM. This fair lady looks down on us each day with pen poised, reading a letter, ready to engage us with her eyes. The original work was done around 1793-1794. It is part of a series called "Komei bijin Rokkasen" a comparison of the beautiful women of the six houses of the Yoshiwara, the pleasure district in Edo, present-day Tokyo, Japan.

"Starting around 1790, the rise of Utamaro marked the beginning of an epoch in which he was the lodestar in a galaxy of woodblock artists. After producing a few portraits of actors, he turned to the portrayal of bijin (beautiful women). He enriched this genre by introducing the “large head” composition, which fills up almost the entire print with famous courtesans in close-up. His women, their elaborate hairdos rendered in exquisite detail, radiate grace and femininity. No artist had more insight into the Yoshiwara Pleasure Quarter than Utamaro, who spent a great part of his life there and knew the quarter and its people intimately."
http://www.imj.org.il

Her identity is revealed in the top right-hand corner of the print. There the artist has placed a rebus which spells out first the name of the 'oira' or brothel and then the name of the woman. Ogi - the fan, Ya - the arrow, Hana - the flower, Ogi - the fan (yet again).

"Kitagawa Utamaro (ca. 1753 – October 31, 1806) was a Japanese printmaker and painter, who is considered one of the greatest artists of woodblock prints (ukiyo-e). His name was romanized as Outamaro. He is known especially for his masterfully composed studies of women, known as bijinga. He also produced nature studies, particularly illustrated books of insects.

His work reached Europe in the mid-nineteenth century, where it was very popular, enjoying particular acclaim in France. He influenced the European Impressionists, particularly with his use of partial views and his emphasis on light and shade. The reference to the "Japanese influence" among these artists often refers to the work of Utamaro." Wikipedia.