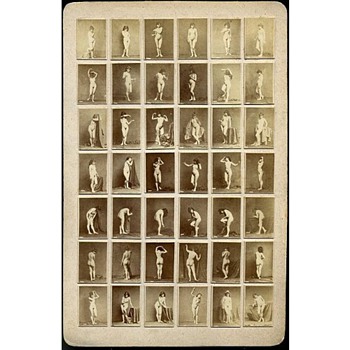 This is an early cabinet card nude-study with 42 'gem' size images of a young woman in various [non-erotic] poses. In nearly 30 years of collecting, this is the only such card I've seen.

Although there is no information about this nude study, the albumen paper more than likely dates the card to the 1880s (maybe earlier but I don't know); about the same time Eadweard Muybridge was creating his famous animal locomotion studies (which included models who were nude, seminude, or draped in a thin fabric). Yet the images are not similar to Muybridge's work because the young woman isn't shown in a sequential motion.

Update (2020-03-19): While studying auctions including very early photographic images, I came across one particular auction Lot featuring a photographic album of female nude studies by the French photographer Louis Jean Baptiste Igout (1837-1881). I was amazed how the examples shown in the auction Lot were remarkably similar to the cabinet card posted here. Looking more closely, I discovered several images exactly match pictures on my cabinet card. The notable difference is that my cabinet card has 42 individual pictures attached to a cabinet sized card as opposed to the auction house’s “composite” images; which are re-photographed pictures printed as a single albumen image on a larger mount. Further searching uncovered many more auctions featuring Louis Jean Baptiste Igout nude studies. After all these years, I am happy to now have a strong attribution to the artist and cabinet card age.