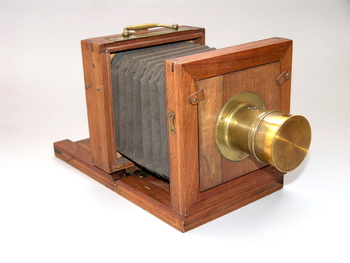 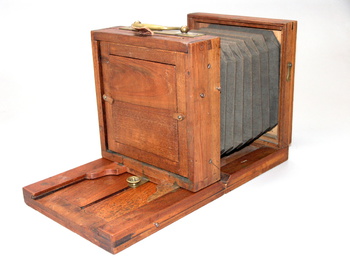 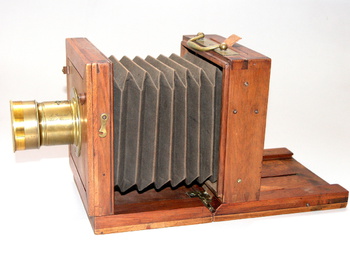 Bernoud, Alphonse.| 1850s.| French or Italian Early Tailboard camera.| 5x5 inch wet plate. |
Catalogue No. 0094.
Found in Paris, the camera itself is unlabelled, often the case at the period 1850-1860, but the lens, original to the camera, is engraved with the name "A.Bernoud, Naples et Florence". Alphonse Bernoud was not a camera-maker or lens-maker, but an esteemed and well-documented society photographer, with studios in Naples, Florence and Livorno, as well as in various parts of France, and whose work is still sold regularly at auctions. Engraved in this way, this camera could have been his personal possession, as it was not unusual in the 1850s for professionals to have their personal lenses engraved with their own names, and as he was not a dealer, it is hard to think of any other reason why the lens would have his name on it. The camera is made of Walnut, in the French style, but could be of Italian origin. If this was Bernoud’s camera, it is about as unique as they get.