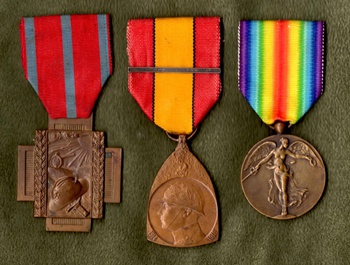 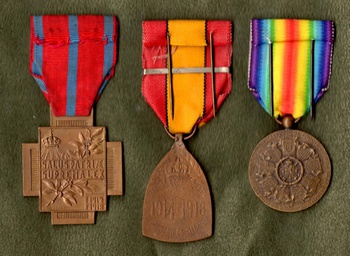 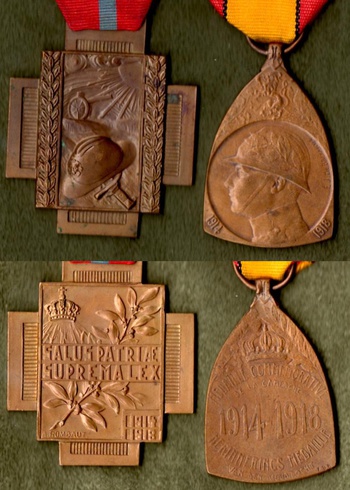 To post all the medals I planed to before Armistice/Veteran's day, I'll need to double up on the daily postings!

The Medaille Commemorative de la Guerre 1914-1918 (Commemorative Medal of the 1914 - 1918 War) shown in the center of pictures 1 & 2 was awarded to Belgians who had served with the armed forces in WWI. Above the helmeted soldier (some sources say it’s King Albert, but he has no mustache) are branches of ivy and laurel with the Belgian lion in the center. The reverse upper portion bears the Belgian crown flanked by more ivy and laurel over the French “MEDAILLE COMMEMORATIVE DE LA CAMPAGNE” and Flemish “HERINNERINGS MEDAILLE VAN DEN VELDTOCHT” (Commemorative medal for the 1914-1918 campaign) surrounding the years 1914-1918. The bar on the medal indicates 12 months service at the front. Additional bars were awarded for each additional six months.

The Croix Du Feu (Cross of Fire) was instituted in 1934 for WWI for those who came under fire at the front. The reverse contains the Latin inscription "SALUS PATRIAE SUPREMA LEX", which roughly translates to “the nation’s salvation is the highest duty.” Mine is the first of three variations. It and the other variations can be found at http://users.skynet.be/hendrik/eng/B1-FireX.html

Further information on the Belgian Victory medal is at: http://www.collectorsweekly.com/stories/35886-the-wwi-victory-medal-series-belgium.