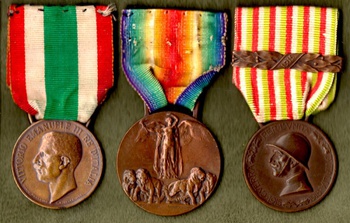 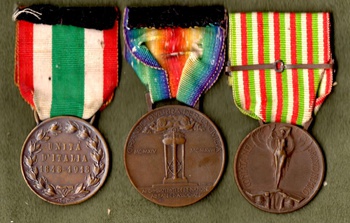 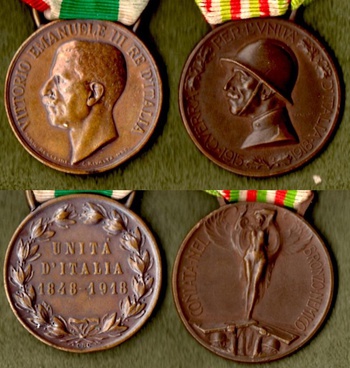 The Italian Victory Medal, shown in the center of pictures 1 & 2, was awarded to the military, militia, and also to other government officials, Red Cross, customs, postal and telegraph services that served in the theater of war. These companion medals are often seen worn beside the Victory Medal:

The Medaglia Dell Guerra 1915-1918 (Medal of the War 1915-1918), at the right of pictures 1 and 2, was awarded to all military and auxiliary services that were active in the war. Since this was a war of unification for Italy, this medal shares the same ribbon design as the 1865 Italian Medal for the War of Independence. Clasps are attached to the ribbon according to the recipient’s years of war service, in this case “1915.” The front of the medal bears the likeness of King Victor Emanuel III wearing a Helmet and around the rim is the text "GVERRA PER L'VNITA D'ITALIA 1915 1918" (War for the Unity of Italy 1915-1918). The reverse depicts a winged Victory standing on shields born up by soldiers. Around the rim is the text "CONIATA 'NEL BRONZO NEMICO" (Made from enemy bronze). There is some conjecture about whether or not these were actually made from the bronze of enemy cannon.

All three medals incorporate a “staffa” – an integral slot rather than a ring to connect the ribbon. This was common among Italian medals. I’m pleased to have acquired this particular Italian Victory Medal since the last posting. It was manufactured by Sacchini of Milan. The medals I posted a year ago were manufactured by S. Johnson and Lorioli & Castelli. I now have all three known manufacturers of the official version of this medal!

More information on the Italian Victory Medal is at: http://www.collectorsweekly.com/stories/36067-the-wwi-victory-medal-series-italy