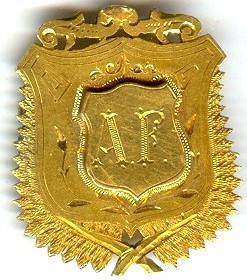 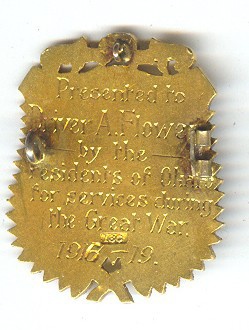 When ever the topic of locally issued medals comes up I always start thinking of US state and local issues given to returning veterans from our numerous wars, civil war to present. Then with a bit more thought I remember some of the really neat Canadian local issue medals in my collection that the Canadians call “Welcome Home Medals.” I also think of the many local issued medals of Germany mostly on the twenty-fifth anniversary of the Franco-Prussian War. I have also seen some such medals from the Great Britain. There are also some really exotic medals from the Indian Native States and probably some other Far Eastern locations. To my Western oriented mind however, the most exotic medal I have ever run across is this gold WWI service medal. This was many years before the internet existed and this medal was sold as a gold service medal from an unknown place. The front has the initials “A.F.“ engraved on a shield which in turn is on a larger shield cupped in crossed fern branches. The back is engraved, “Presented to // Driver A. Flower // -- by the -- // residents of Okato // for services during // the Great War // 1916-19.“ When I first laid eyes on the fern branches around the edge of the shield shaped medal I knew that this medal was from New Zealand. As a former coin cataloger I was familiar with these same ferns on the New Zealand coat of arms as displayed on so many of their coins. The legend on the reverse indicated that this medal was presented by the residents of a place named Okato. That name was not listed in my Geographical Dictionary so it had to be a very small place or no longer in existence. Since I am also a book packrat I did have an 1890 World Atlas to check and sure enough there it was: Okato, New Zealand, population of 47 people in 1890!
Another interesting note about this medal is that the metal content is marked as ‘18Ct.”
I don’t know if this is the way it was done back then in the British World but as far as I was taught “Carat” was for diamonds and “Karat” was for gold.