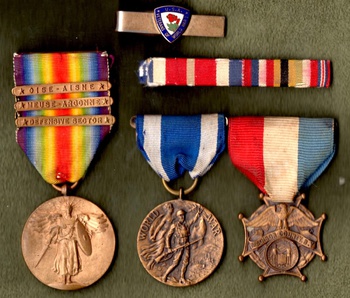 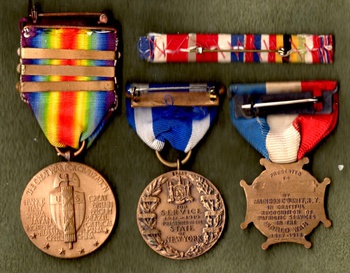 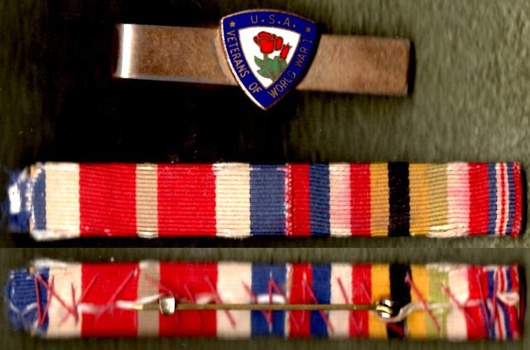 Here’s a recent eBay purchase of mine. Although the Victory Medal, with battle clasps representative of the 77th Division, is an upgrade of the poorer condition 77th Div. Victory I already had, I bid more than I otherwise would have to get his intriguing medal bar.

I think that the blue, white and red ribbon to the left (center is soiled, but clearly was white) may be for the Certificate of Merit Medal. This medal was awarded between 1905 and 1918, and replaced an actual certificate. It was awarded to enlisted soldiers for distinguishing themselves in action or other hazardous service. In 1918, these medals were replaced by the Distinguished Service Medal, and later by the Distinguished Service Cross.

The second ribbon on the bar is sometimes misidentified as the first issue of the Victory Medal ribbon, which was later replaced by the familiar rainbow ribbon. This actually does fit the description of one of the ribbons submitted for consideration by the Victory Medal Commission and it contains the national colors of each of the major allied powers. To my knowledge, however; this ribbon was never issued with the Victory medal. It was used with some of the local veteran’s medals.

It makes sense that this group may have come from one veteran. The 77th Division was made up of men from New York State, and this came with WWI veteran’s medals from New York State and Madison County N.Y. That begs the question (and is the mystery here) who really did issue the multi-color ribbon on the bar? Also, since it is on the same bar as the Certificate of Merit Medal ribbon, could I have misidentified that ribbon? Could that also be some other local veterans’ ribbon? One clue may be in the tie clasp for the Veterans of World War I of the USA, which was a Veterans organization that may have also issued ribbons. Hey Militarist! Help!