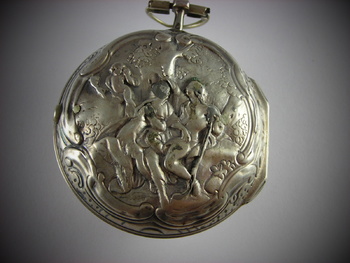 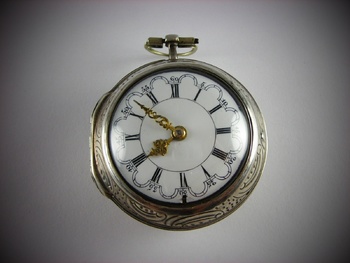 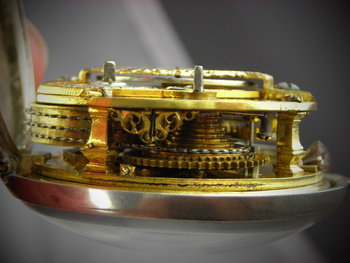 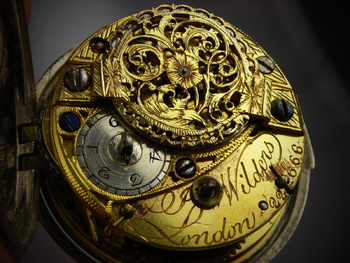 Here is a very early verge fusee pocket watch made by J. Wilders of London. The hallmarks on the sterling silver repousse case date this watch to 1787 making it 229 years old. This watch was made the same year the United States Constitution was written and ratified (September 17th, 1787). The movement has large square pillars, a beautiful gilt plate and beautifully pierced balance assembly. Based on the two-footed balance cock (or bridge) the watch movement has a Continental influence (Dutch). Many watches of this style were manufactured in London for the Dutch market. The watch has Amsterdam watch papers.

Used in antique spring-powered mechanical watches and clocks, a fusee is a cone-shaped pulley with a helical groove around it, wound with a cord or chain which is attached to the mainspring barrel. Fusees were used from the 15th century to the early 20th century to improve timekeeping by equalizing the uneven pull of the mainspring as it ran down.

Repousse is a metalworking technique in which a malleable metal is ornamented or shaped by hammering from the reverse side to create a design in low relief. It is also known as embossing.