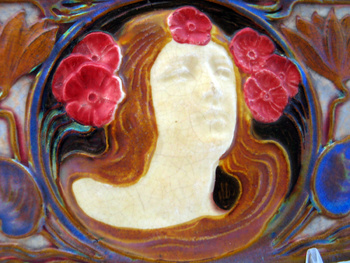 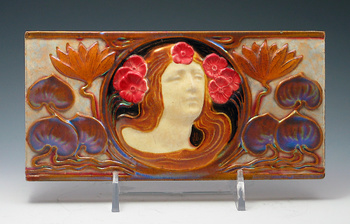 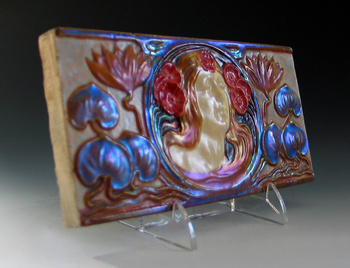 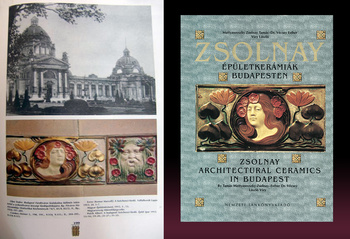 Zsolnay pyrogranite ceramic tile (circa 1903-09), hand-pressed with raised decoration, and covered with transparent, coloured and metallic Eosin glazes. The raised nereid and floral motif on this tile was paired with a smaller square Neptune tile and this pattern was repeated along the wall of the original entrance of the Szechenyi Bath. There are two versions of this nereid tile, one left facing the other right facing. When paired with the smaller Neptune tile, these opposite facing tiles appear to be gazing longingly at their mythical master. Near mint condition. Dimensions: 6"x3".
----------

In addition to standard hard fired ceramic, Zsolnay (Pecs, Hungary) produced pyrogranite, which is another type of ceramic. When fired under a high temperature pyrogranite becomes acid and frost-resistant. This made it attractive to architects and designers who were looking for a durable material to use as decoration outdoors and so Zsolnay’s pyrogranite tiles were used to adorn the exteriors of the Matthias Church, the Hungarian Parliament Building, the Museum of Applied Art, the Geological Institute, the K?bánya Church, and the Széchenyi and Gellért Baths, all in Budapest.

The Széchenyi Medicinal Bath in Budapest is the largest medicinal bath in Europe. The bath was named after István Széchenyi (1791-1860), a Hungarian politician, theorist and writer, one of the greatest statesmen of Hungarian history. The bath can be found in the City Park, and was built in 1913 in Neo-baroque style to the design of Gy?z? Czigler. The construction of the bath began on 7 May 1909. Designed by architect Eugene Schmitterer, the bath, named in the news as the Artesian spa, opened on 16 June 1913. The attendance of spa was in excess of 200,000 people in 1913. At that time it had private baths, separate men and women steam-bath sections, and different men / women "public baths".