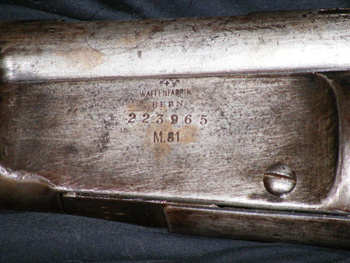 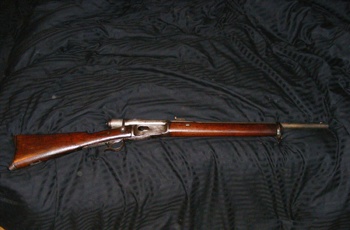 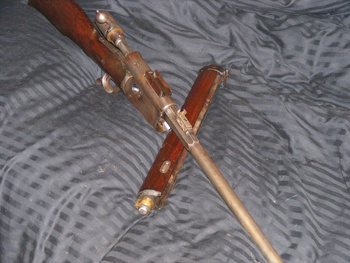 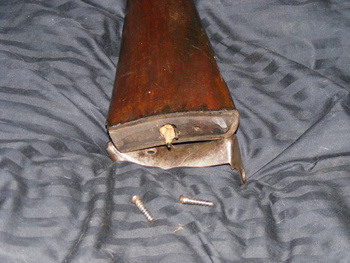 With the amount of research I have done, I can tell You a few things of this old Military Rifle and it is likely that there is just as much I don't yet know.
First off a bit of translation: Waffenfabrik (loosely) Weapons Factory or possibly [fabrication]) and Bern being a location, Bern Switzerland.
I bought it from a friend, who bought it off of one of those internet firearms auction houses, who wanted to sporterise it (make it to fire modern ammo). In this event most processes tend to destroy the originality and any remaining value in old weapons like this one.
I wanted one of those rare inoperable rifles to display above my fireplace in a nostalgic manor of speaking and well as soon as I saw it I had to have it. After some negotiating and lite research, I decided $150 was not too much to ask, when the impending doom was ultimately the loss of an already seemingly rare piece of History. I don't care if it is or isn't truly rare and valuable, as the one thing I must mention about this particular Vetterli, is every part stamped with a segment number is in fact original and corresponding to the serial itself including the spare firing pin and THAT, My friends is rare to find, as well as the fact it having the appropriate"Inspektor" approval stamps in all metal, small metal and wooden parts for the Era and region.

The original parts missing or replaced prior to My ownership of it includes the rear strap mount and strap itself (which is apparently very normal for these rifles in particular), the rear sight changed to a "Bull horns" style (for what ever reason,I can only assume the original went missing or broke long ago), cleaning rod missing (also Normal I have been told) and it is without bayonet and bayonet scabbard (expected as they were used more than the guns themselves)

SO INTO THE DOCUMENTED HISTORY::
While the Swiss never used the Vetterli in any armed conflict, it is interesting to note the closest they ever came to combat was in Finland. According to Markku Palokangas, author of the book Military Small Arms in Finland 1918-1988

The Swiss Vetterli rifle, designed by Swiss designer Friedrich Vetterli, the manager of the Neuhausen factory, and adopted in both Switzerland and Italy, utilized a Henry (Winchester) M1866 type tubular magazine and a bolt system derived from the German Dreyse needle fire rifle. The Swiss Vetterli was the first repeating rifle widely adopted for military service. Interestingly enough, the Vetterli continued to utilize rimfire ammunition until phased out in the 1890's in the favor of the Schmidt-Rubin. Thus it was the most advanced military rifle at the time of its adoption and one of the most obsolete at the time of its ultimate replacement, but it remained in service for over twenty years during a time of great technological change. It was also the first repeater to have a self-cocking action and small calibre. Adopted by the Swiss Army in 1868, it underwent several improvements between 1871 and 1879. These culminated in the model 1881. Throughout its service life the Swiss Vetterli's magazine system remained unchanged. Early rifles (M1869) were manufactured by Schweizerichse Industry-Gesellshaft in Neuhausen. This is the famous SIG arms company that is still a significant manufacturer of arms today. In addition to SIG, the M1869 was manufactured by no fewer than eight other manufacturers. The decision to use the 10.4 millimeter rim fire cartridge in the Veterrli rifle was apparently motivated by considerations of economy since the cartridge it was already in existence and proven in the Milbank-Amsler conversions of the Federal rifle. Not withstanding that it is a rimfire, this round was a relatively high velocity, flat trajectory load, far ahead of the short range, large caliber rounds used in the other converted breach loading cartridges. The Vetterli striker has a forked firing pin which passes through two firing groves in the bolt face for double striking the rimfire cartridge.
The cleaning rod of the early rifles was set into the left side of the stock, similarly to the later M1878 French Kropatchek, but that was soon changed and the fully operational M1869 (and all subsequent Swiss Vetterlis) carried the cleaning rod directly below the tubular magazine. The first rifles were made with a loading gate cover but that too was soon found to be unnecessary and removed all together with the adoption of the M1871.
The M1869/71 (aka M1871) had an improved elevator system and a simplified receiver. The leaf spring which assisted the elevator system was deleted, and the back sight was re-graduated from Schritte (paces) to meters.
In 1878 an improved variation was adopted.
Although substantially a M1871, this variant only has a single barrel band, the fore stock is not checkered and it mounts provisions for a sword bayonet. This rifle also mounted a significantly different Schmidt quadrant site with a much shorter leaf than the M1869 or M1871. In 1881 the Vetterli was updated with a new model, but one which had only the most minor of modifications, the principal one being the addition of an extention to the rear sight leaf. Many M1878 rifles were subsequently modified by fitting with the M1881 rear sight leaf. For clarity the M1878/81 ,was never an official designation.

Finnish supporters of active resistance against Czarist Russian oppression started planning an armed uprising and in 1904 contacted revolutionaries in St. Petersburg. It was agreed that weapons would be acquired in Central Europe and were to be smuggled partly to the St. Petersburg area, partly to Finland.
Colonel Akashi, Japanese Military Attaché in Stockholm, became financier of the operation. In this way Japan intended to cause confusion in Russia with whom was at war at the time. With funds received from Col. Akashi the Finn leading the project, Konni Zilliacus, bought from Paris and Hamburg over 15,000 Vetterli rifles {ed. note - they were Model 1869/71's} with ammunition, discarded by the Swiss Army.
An old cargo vessel, the S/S John Grafton, was acquired for transporting the rifles. The operation was carried out in August-September 1905. When no one from St. Petersburg arrived at the agreed meeting point at sea the whole cargo was shipped to Finland. Only part of the rifles had been unloaded when the ship ran aground. In fear of being discovered the ship and the remaining cargo were blown up and sunk. Nevertheless the Russian gendarmes learned of the operation. Rifles from the ship were recovered by divers and those stored ashore were confiscated. After the unfortunate smuggling effort Vetterli rifles were known in Finland as Graftons, after the sunken ship. During the following years a further small number of Vetterli rifles were acquired and smuggled to Finland.
The Vetterlis featured in the secret preparations for the Finnish uprising but when the War of Independence started in the winter of 1918 the rifles were considered hopelessly outdated and lacked ammunition. Nevertheless, more Vetterli rifles were obtained during the war when Russian arms depots were captured and rifles confiscated 12 years earlier were found.The Finnish Defense Forces never adopted the Vetterli rifle as a standard service weapon but there was a small number stored in arms depots until the 1950’s. "The Italians adopted the Vetterli in 1870 as a single shot. A box magazine was later added, and in the early 1900's, many Italian Vetterlis were converted to fire the 6.5 Carcano round. Some of these converted rifles did see service in World War I.It is significant note that while the rifle was the most advanced of it's type when adopted, it was likewise the most obsolete when finally replaced. The eventual replacement of the Vetterli, the Schmidt-Rubin series, continued the tradition, of high quality, shooters rifles, started by the Vetterli series.