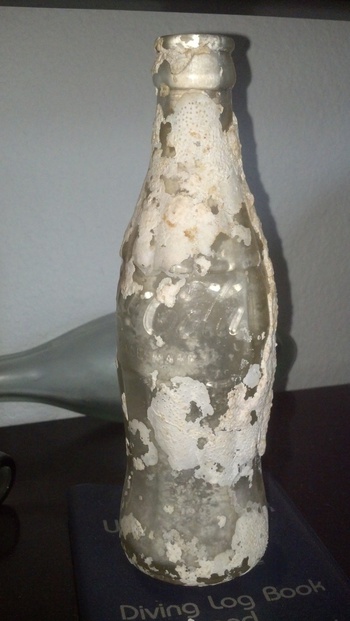 Found this bottle while diving on a coral head in Kwajalein lagoon. Back in 1944 Kwajalein atoll was part of Japan's outer rim defense. The US fought to capture the fortified islands that made up the Kwajalein atoll, as part of the greater campaign of island hoping towards Japan.
When I first investigated the bottle I noticed there were no markings on the bottom of the bottle. After seeking expert advice I was told this is becouse during WWII Coke made a brillant marketing move. They told the government that if Coke continued getting their supply of sugar they would sell Cokes to service men anywhere in the world for 5 cents per bottle. Coke set up portable bottling plants all over the place supplying the troops with Coke thus producing bottles with no embossing on the bottom. Now that I was reasonably sure of the bottle's date it was time to imagine how it ended up in the middle of the Pacific Ocean.
An American sailor onboard a US warship at anchor in Kwajalein lagoon after the vicious battle with the Japanees, taking a break, downing a Coke and thanking the Lord he was still alive as he watched the sun set, then throwing the bottle as far as he could over the side of his ship where it lay undisturbed for 40 years until I came along. If it wasn't for the distinctive shape of the bottle I could have easily overlooked it as it has significant growth and looked every bit a part of the surrounding coral head.