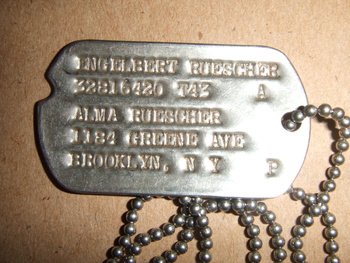 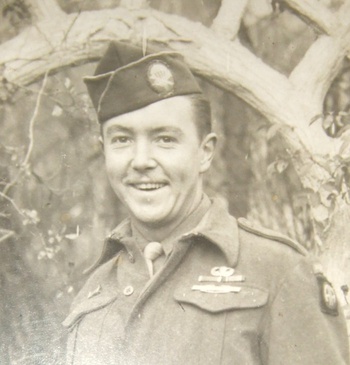 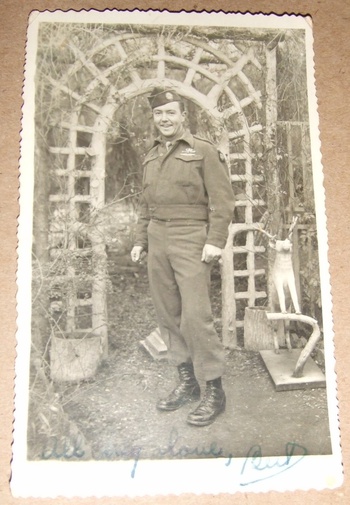 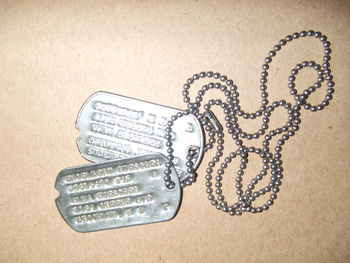 I just picked up this small grouping that is identified to Engelbert "Bert" Ruescher, who served in WW2 with the 504th PIR.

Ruescher, who died earlier this year, joined the Army in February of 1943 from NY City. He was single, worked in the glass industry and was 19 or 20 years old.

His dogtags are the early style "Next of Kin" dogtags, which most likely carry his mothers NOK information.

Ruescher's early 43 enlistment, means he probably missed the early action of the 504th at Sicily ("Operation Husky") in JUL 1944.

He may have been part of the first replacements and seen his first action at Salerno or Anzio (where the nickname "Devils in Baggy Pants" was given to the Regiment).

Because of casualties the 504th was not part of Normandy Invasion.

The 504th did jump during Operation Market Garden and was a part of the defenses of Bastogne.

The photograph is a French Real Photo PostCard and shows a full standing Ruescher. He wears the ABN oval on his hat and proudly shows both his Combat Infantryman's Badge (CIB) and Airborne Wings. Additionally, he wears a Purple Heart and Campaign Ribbon bar. I don't have information on when/ where he was wounded. Most likely the image was taken in late 1944 while on R & R in France.