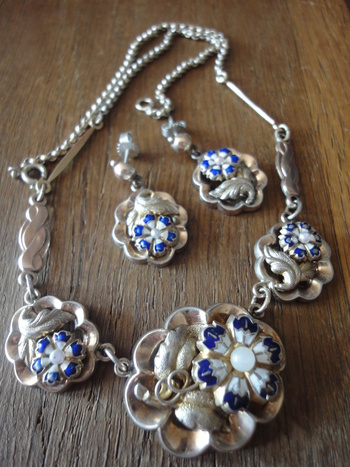 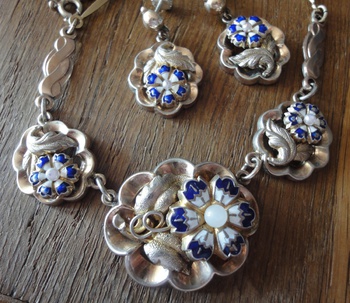 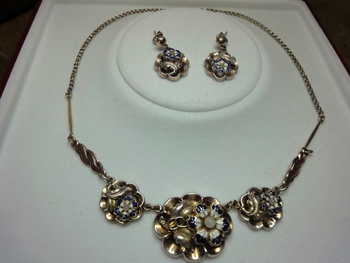 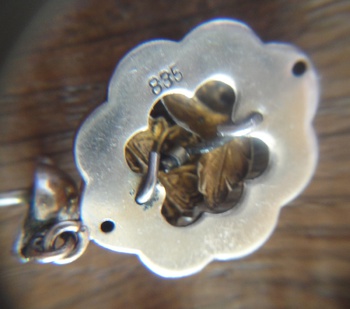 Some years ago I bought on a flee market this charming demi parure (necklace and earrings). I hardly paid nothing for this set. Made of vermeil (gold over silver marked 835, see photo) probably made in Germany during the so called Biedermeier period.
(Biedermeier (1790 to 1848) .During this period, wearing of jewelry was reserved for nobles and upper classes. Floral motives, tendril shapes and ribbons were particularly popular. Diamonds became ever more cherished in this time. Thus, even buttons and buckles were set with these precious stones. Along with the French Revolution, the supremacy of the aristocracy came to an end. The bourgeois demonstrated their new position by wearing jewelry. Biedermeier jewelry did not have its own style per se. Rather, Romantic and other style nuances from past epochs were copied.Biedermeier was an influential style of furniture design from Germany during the years 1815-1848, based on utilitarian principles.)
The set is nice enameled with blue and white enamel flowers with a heart of a little white bead. Is there somebody who can tell more about this set?