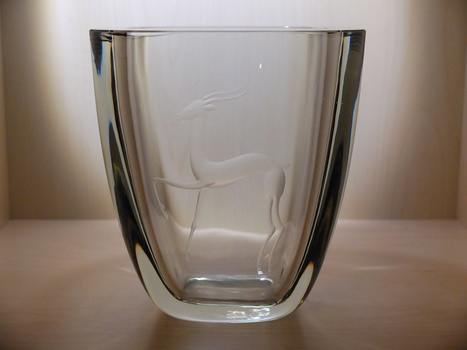 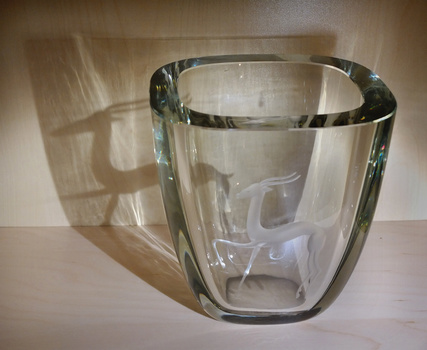 This vase I found in a shop in Vaxjo selling classic and contemporary design and home furnishings, even older stuff. I recognize the typical design from Strombergshyttan but are not entirely sure, because the vase has no sticker and is not signed. In addition, the color is not the typical blue-tinted crystal from Strombergshyttan, but the model is not mistaking, B316 designed by Gerda Stromberg in about 1940.

In the catalog of 1972 are no other primary colors in glass than the bluish crystal, but in the 1954's a few vases even comes in a second tone, but not this model B316. In the catalog which I believe are from the early 1940s, however it comes in two different colors, 915 which seems to be the usual bluish and also 517, which would be this little more warm, green-yellow tinted crystal? I think it must be so, otherwise some other glasswork maybe have plagiarized Gerda Stromberg's classic model?

When you look at the size, my vase is 155mm in height, but in the catalogs from 1972 and 1954 it has 80, 100, 130 and 150mm. Have they then made it to the wrong height was my first thought and this therefore become a second grade glass? The lack of signing was normal at the time, what I understood glass was not signed at all by Strombergshyttan before 1950s, but when I look in my oldest catalog I see that the heights for B316 listed there are 80, 100, 130 and 155mm. This vase should therefore be made not later than early 1940s. But as I wrote, it is a classic, clean and simple design that came with Strombergshyttan until the 1970's.

The engraving I can not find in the catalogs, but there is missing many pictures. It looks pretty much 1930's out of my eyes. It is very well made and maybe it's my uncle, Ragnar Bergqvist, who did the work in the engraving workshop? He was educated at engraver school in Orrefors and followed his father Knut to Lindefors/Strombergshyttan 1929.

If it is a vase from Strombergshyttan, which I'm pretty sure about, I think this different tint in clear green/yellowish crystal is still relatively difficult to find for the model B316 in the market for classic glass.