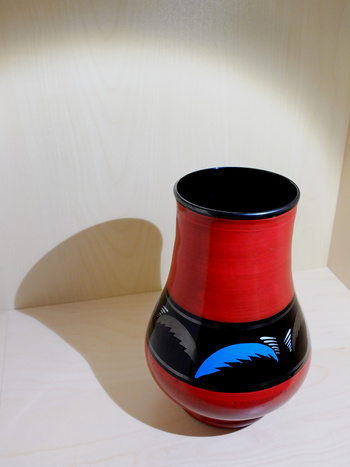 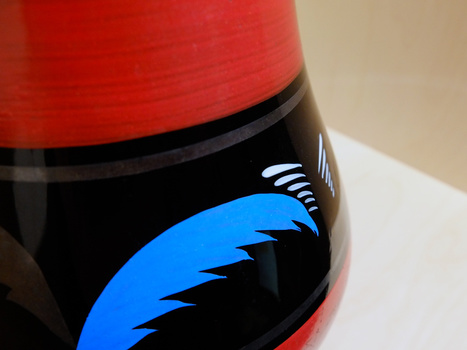 I think Ulrica Hydman-Vallien at Afors glassworks was inspired by the early glass models, made at the factory in the 1930s, when she designed the glass to this entry:

Hand-painted glass has been the tradition in Afors since the Art-Deco period around 1930. The 19cm high vase I show here is, what I can see on the style, from the 1930s. It's painted on opaque black glass, which was typical for Åfors at the time. This vase is still a bit unusual to other typical glass from Afors in the 1930s I have seen (and that's why I fell for it). Usually dominates the black and unpainted glass, but this has mostly been painted over with the Afors orange-red color. The opacue black glass is just like a stripe on the middle where the decoration has been painted, and as a thin, black line at the edge of the mouth. But it is from Afors, there is no doubt about that, it has namely a sticker from the factory (but pretty worn so I turned it backwards while shooting).

Who designed the glass, I can only guess at. But according to data on glass expert Borje Akerblom's website http://www.bayakerblom.se has these worked by drawing glass for Afors at the time:
Tore Strindberg - about 1930.
Erik Norstrom - about 1930.
Fritz Dahl 1922 - 1937.
Karl Zenkert 1920s -
Karl Diessner 1938 -
Karl Zenkert and Karl Diessner, I know, was also talented glass painters, so maybe it's one of those who painted this vase?

Unfortunately, the Orrefors-Kosta/Boda group closed down production at Åfors last year 2012. First would glass painting remain, but in the autumn came the shocking news, all production stops and Afors glassworks closed down completely. This is the bitter truth that our famous Glass Empire in Sweden is experiencing today. At the same time news came to enrich Orrefors, too close completely. The factory where the Swedish art glass was born and became known also went to the grave 2012. Handcrafted art glass production in larger series is no longer possible in Sweden. Only smaller units remain and for Orrefors-Kosta/Boda Group remains today just Kosta Glassworks, where only about 50 workers could stay.