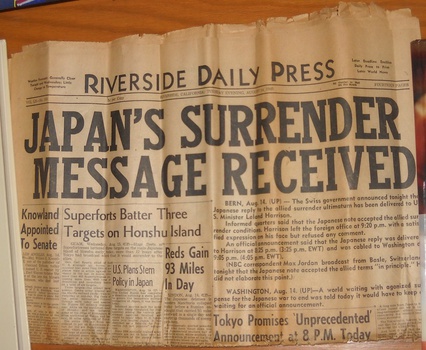 As an amateur historian, antique collecter and junk hound...I had always dreamed of uncovering a very old and/or historic newspaper somewhere. This is exactly what I had in mind...and it had been under my nose my entire life. My father has an old trunk that he has kept his political memorabilia in for 30+ years, but I had never seen it's contents. I finally opened it..that is where most of my recent posts have come from. This was in the bottom, folded up into eigths. I am in the process of trying to flatten it out under a stack of heavy books. It is a copy of the Riverside (California) Daily Press from August 14th, 1945, V-J Day (Victory over Japan Day). The Atomic bombs were dropped on Hiroshima and Nagasaki on August 6th and August 9th, respectively, Japanese time. The next day, negotiations of a surrender agreement, called the Potsdam Declaration, began. A sticking point was whether or not the Emporer could remain in power. A telegram was sent from the Emeperor on August 14th (13th, US time) announcing complete surrender, it was promptly accepted. The next day the Emperor announced the Japanese surrender on the radio.