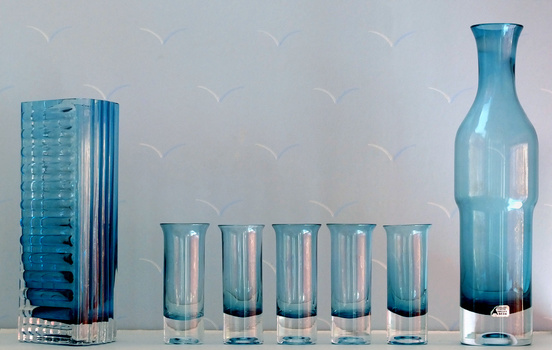 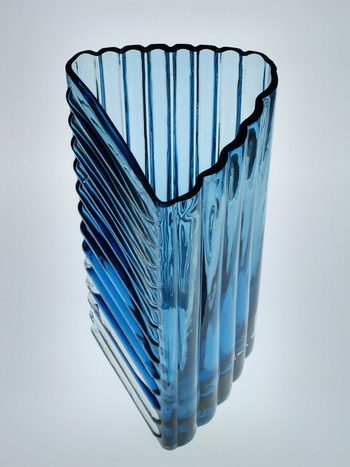 Aseda Glassworks I think managed the tradition of "beautiful everyday products" in the best way under Bo Borgstroms time, from 1961 to 1977. The products would not only be beautiful, but also so cheap that many people could afford to buy them. This lovely blue color tint vase, decanter and shot glasses from Aseda, I think is very good examples of that tradition.

Decanter and shot glasses are by Bo Borgstrom's design, but the vase is not safe attributed to him. On precisensan.se forum, someone wrote that this Aseda model was designed before Borgstrom came to Aseda, but I have not had it confirmed. Personally, I still think it is Bo Borgstrom behind this triangular model with horizontal and vertical relief pattern, but it could also be Lasse Frisk, who was designer at Aseda 1970-73. Maybe someone knows for shure how about this? The vase design does (in my eyes) not seem to come from 1960 or earlier, so the task from precisensan that it would have been designed before Borgstrom came to Aseda 1961, is what I can see not so credible? The vase looks more like it's from 1960's or 70's.