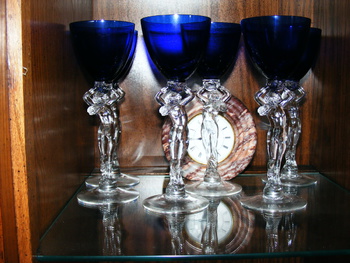 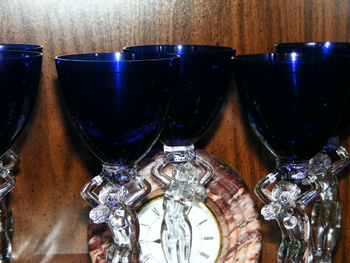 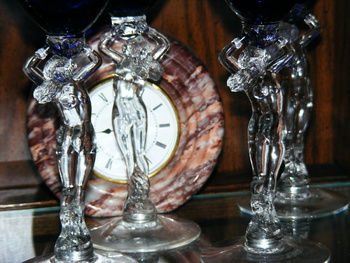 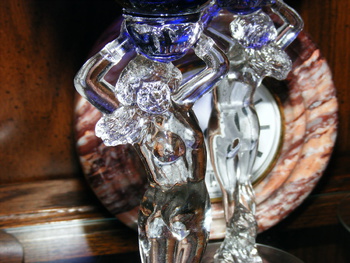 These belonged to Henry Ford...but the price has nothing to do with that unless someone can archive his belongings that were sold, then price could sky rocket. My grandfather purchased them at his estate auction in 1953...one year before I was born and given to my father then to me when dad died. They sell for $290 for one of them on E-bay.

They have been in my family since 1953. Purchased within a year of my birth from the Henry Ford Estate in Grosse Pointe Michigan by my grandfather who went to all auctions of the Fords and Chrysler's! These were never used and stayed in my grandmothers china until my grandfathers death if 1968. They were then passed to my father and then passed to me in 2002 after his death. They have some history behind them and sell very fast in auctions as a single glass or sets....but very few sets of exactly the same color and size are sold that were made at the same time or as pristine as these! Heights on some through the years vary by 1/16" to 1/8"... mine are all exactly the same!

SOME HISTORY ON CAMBRIDGE GLASS CO.

Cambridge Glass Company was founded in 1901 in Cambridge, Ohio. The company closed in 1954, reopened briefly, and closed again in 1958.

Cambridge introduced the #3011 "Statuesque" line in 1931, in nine sizes of stemware, plus a number of other decorative items. Some sizes were discontinued after a run of a few years. The Claret was dropped in the late 30's and production of the rest of the #3011 line continued until the close of the factory in 1958, and a limited run of the cocktail size was produced by "Imperial" after it acquired the assets of "Cambridge". The initial release featured a cordial along with the brandy, but in later years, Cambridge dropped the original cordial and marketed the brandy as a "cordial."

The nude section itself was made in three sizes: 4Â½", 5" and 6". [Mine are the 5"] The largest size, the 6" was used only on their banquet goblet in the stemware line but was soon discontinued because they were considered too large, but it was used in a number of the "miscellaneous" pieces including candlesticks, bud vase, ivy ball, etc.

The claret glass was specified to contain Claret wine. Claret was a British term to describe what was originally essentially a rosea wine from Bordeaux (clairet in French,) but, by the advent of the cocktail, had simply come to mean red Bordeaux wine. The Claret glass was traditionally small, often with a slight flare at the lip. In later years, the term Claret was used somewhat less frequently and the glass became more balloon-shaped. 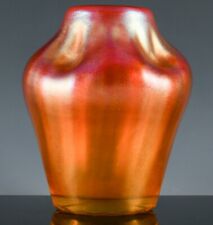 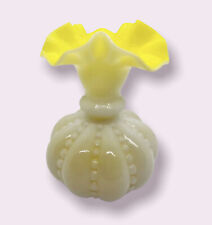