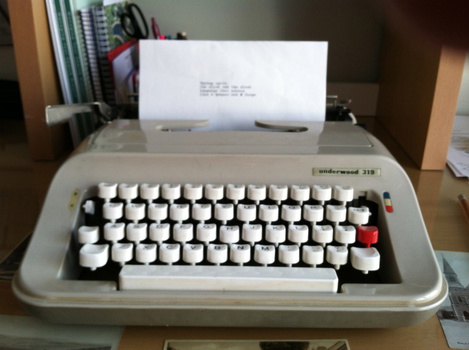 Underwood, the great American typewriter manufacturer, was acquired by famed Italian typewriter manufacture Olivetti in the 1960s. The merged company continued to manufacture typewriters under the name of Olivetti Underwood or Underwood Olivetti. In the late 70s, however, the Underwood name was revived and used on machines that the company manufactured in Spain. One of these was the Underwood 319….
The body of the machine as well as the keys is made from molded plastic, but the interior mechanism is all-steel and is based on Olivetti’s famous Lettera machines…. The font style is Pica, which looks like a large Times New Roman. In fact, it most resembles the American Typewriter font that Apple includes in its office suite. As you can see, it is sober, well-spaced, and very readable. (cf. Retro Tech Geneva)