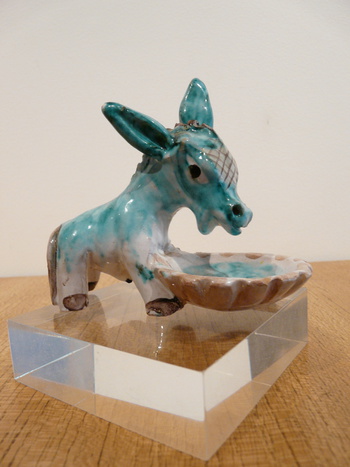 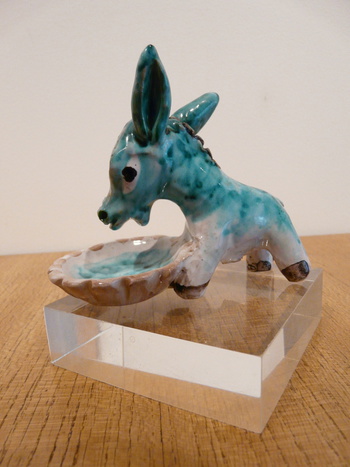 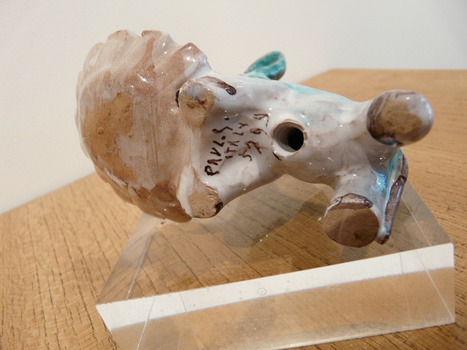 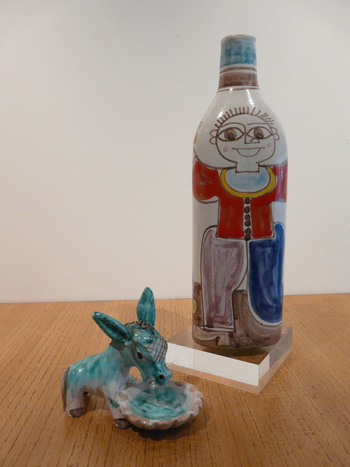 Recently I read an article on an Italian collector of these ‘Ciucci’ these donkeys: “Antonio Dipino, owner and chef of a renowned restaurant, has been collecting art pottery of the region for many years. … His eyes shone while he told me how a group of German artists settled in Vietri in the 20’s. Working side by side with Vietri craftsmen they blended the local pottery making style and the new art trends, revitalizing the millennium-old ceramic tradition that was stuck in the repetition of old fashioned products, no longer in tune with the contemporary taste.”

This era is referred to as the 'periodo tedesco', the German period.

These German artists interested me. The major name is Richard Doelker. But it also includes “Günther Stüdemann, Elle Schwarz, Margarete Thewalt Hannash, Irene Kowaliska, Marianne Amos … they marked the beginning of a new era in the history of Vietri pottery. They unleashed a creative power that influenced the artists of the region in the following decades, promoting the creative talent of Giovannino Carrano, Vincenzo Pinto, Giosuè and Salvatore Procida and Guido Gambone.”
http://www.thatsarte.com/blog/highlights/the-sudden-joy-of-a-close-encounter-with-vietri-pottery-art/

What interests me is that my little donkey (il mio asinello) is signed in a very un-Italian way.
It reads “ Paul s. Italy ”.
Not Paolo but Paul.

Walter Pellegrino has given me new information about this mark. See his comments below:
As the author of the first and only books written in English on the subject of Italian Pottery Identification I can help solve this mystery. The word is "Paul's. It was a an American Import Company located in New Jersey. The company was created in 1898 by Edward Paul. In the 1930's the company was purchased by the Arditti family who kept the original name of the company. A few years ago I interviewed Arthur Arditti, now in his 80's and discovered that the company began importing Italian ceramics in the late 1950's through the 1970's. Arthur, himself, made buyer's trip to various Italian towns and cities, particularly in the south. Contract documents show that Arditi insisted that the only the name "Paul's" appeared on the ceramics. It was a way of ensuring that competitors would not discover the firm's sources of supply. Paul's stopped importing Italian pottery in the late 1970's.

These little Italian figures have always been seen as ‘kitsch’. They are becoming better appreciated these days and are synonymous with the Italian town of Vietri. They can date as early as the 1920’s!

If I were to live in Italy this is the area where I would head: the Amalfi Coast (aka la Costiera Amalfatina or even better 'la Divina'). Vietri is a town known for its ceramics and these little donkeys were picked up by the tourists who visited the area south of Naples: Vesuvius, Pompeii, Ercolano, Sorrento and worked their way down the coastal roads in search of even better panoramas. Capri?