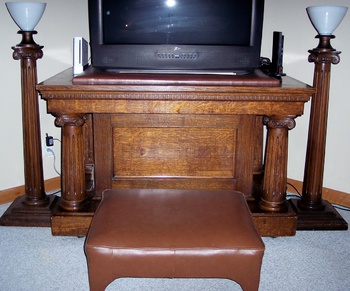 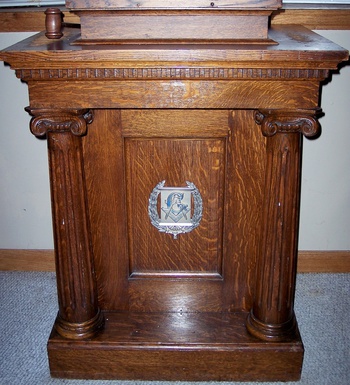 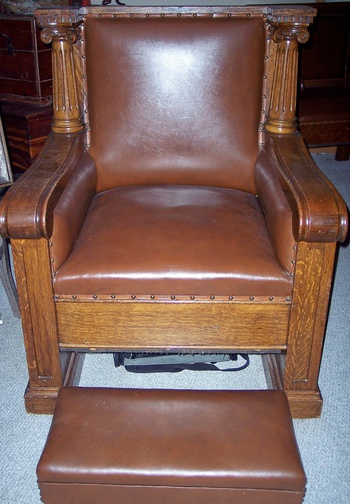 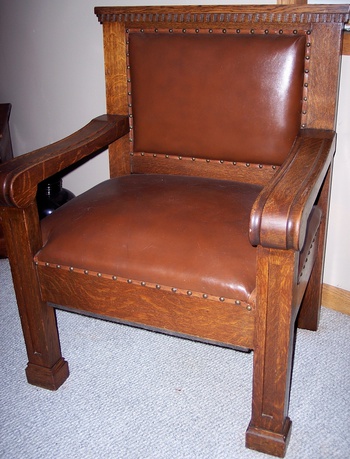 Any thoughts or information regarding the value of the items would be greatly appreciated. I am eclectic in my collecting and have owned these pieces for about two years now. They were once housed in the Rock Island Illinois Masonic Temple, from whence they came. Included are a ceremonial altar, flanked on either side by Corinthian column lamps and a padded leather kneeling pad which rests at the base of the front of the altar. The lamps were unshaded when found. I am uncertain as to whether they were originally appointed with them or not. The milk glass shades shown have been personally added. The altar has a locking, padded leather, top compartment, which presumably once held ritualistic items. When opened it reveals a contraption which appears to elevate up and out, perhaps holding something on display. There is a brass lever near the bottom of the piece which raises and lowers the altar on it's casters. There is a beautifully engraved plaque on the top front of the piece which states, "Presented by R.I. Chapter #269 O.E.S. (Order of the Eastern Star,) July 1, 1913. Next is a book stand / pulpit, with marble top and locking back cabinet with skeleton key. Then we have two, what we call "king" chairs and one simpler "queen" chair. We have one small kneeling pad seen in front of the king chair. We also have yet another column lamp not seen in the photos but the same as the other two. All of the items are comprised of quarter sawn, (tiger oak) and have a beautiful patina. In storage are two wonderfully large tiger oak frames, each matted with oval cut outs for past members photographs. **Thanks for the info Vestaswind**