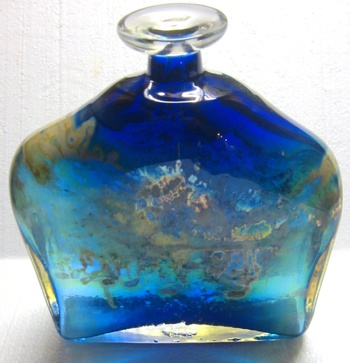 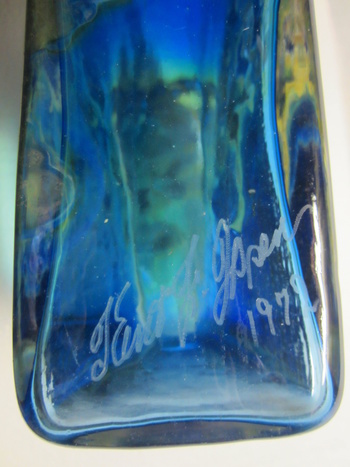 Recently I have been very fortunate to purchase several museum quality objects by Kent Ipsen from the collection of an artist who knew him and collected his work extensively in the 1970s.

This bottle, or vase in bottle shape, is another very large scale object. It is 10.5" tall, 9" at the widest part and is 3" deep. It is composed of thick glass and weighs over eight pounds. The top is made to look like a stoppered bottle. Technically, it might be called a vase, but the opening is thinner than a pencil, so this is not really intended for use beyond display. Cased in clear glass are swirls of cobalt and aqua, speckled with iridescent golds and yellows. To me it gives the impression of a coral reef in a clear lagoon. It is signed Kent F. Ipsen 1972.

It bears mentioning that Ipsen was one of Harvey Littleton's students at University of Wisconsin in the early 1960s. This was the first college course in glass blowing. Ipsen debuted in the important 1970 exhibition, 'Objects USA,' with the work of other studio glass pioneers such as Marvin Lipofsky, Dale Chihuly, Fritz Dreisbach and Richard Marquis. He went on to be the director of the glass program at Virginia Commonwealth University's School of Arts in Richmond, VA. His works are exhibited in venues including: the Smithsonian American Art Museum, the Brooklyn Museum, the Corning Museum of Glass and the Vatican Museum.