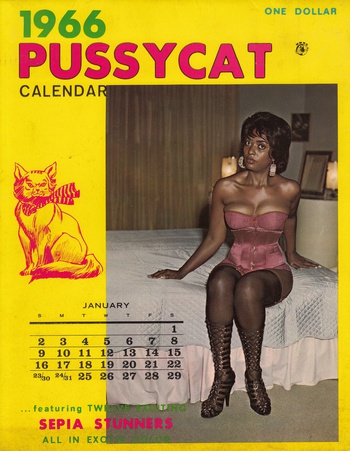 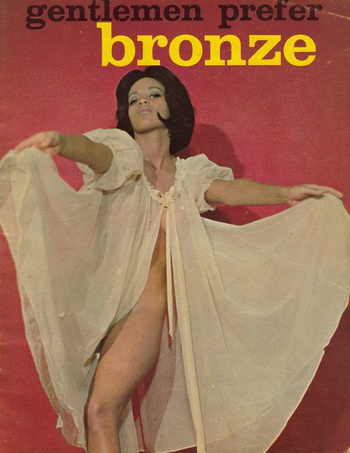 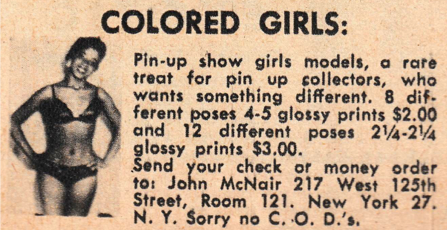 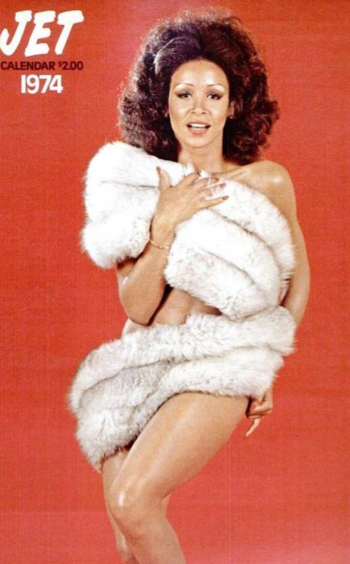 Were there African-American Pinups? Well…of a sort. Remarkable (and stupid) as it seems now, women of color were not accepted as beautiful by the dominant white culture for long, long time. The first Black woman on the cover of Playboy Magazine was not until 1971, absurd as that seems today. Even Vogue Magazine did not feature an African-American on their cover until 1974, an oversight they have been compensating for since. In my opinion they still have a long way to go.

Smutsters actually caught on first. They recognized there was a market for women of color in the back pages of men's magazines, where they were marketed as "exotic" but still largely aimed at a white market. Increasingly as incomes slowly rose for the minority, magazines with black pinups would be produced for the growing black market. The 1966 Pussycat calendar of Black Pinups is just like the white pinup calendars found in gas stations…but this was produced by pornographer Reuben Sturman rather than, for example, your favorite brand of gasoline additive.

Soon Jet Magazine started producing black pin calendars of their own, and the editor of Ebony and Jet put a beautiful black women in each issue, providing his own community that which the dominant culture did not see. Black IS beautiful.

The Phrase "Black is Beautiful" which became popular in the late 1960s was more than an empty platitude. It was aimed at the dominant white culture, but also was used to uplift the African-American community…centuries of segregation and oppression had all but eliminated the pride and confidence of an entire race.

Pioneer photographer Howard Morehead, an African-American photographer who was ahead of his time, created and published the photographic essay "Gentlemen Prefer Bronze" as a book in 1964. Previously the photographer had organized among the first modern day African-American beauty shows. Incidentally, African-American women were banned from the Miss America Pageant for decades, and contestants were required by "rule number seven" to be of the white race. In 1970, Iowa's Cheryl Brown became the first Atlantic City black contestant. Since 1984, 28% of the winners have been black. The book is today scarce, but at the time it had immeasurable influence.

So were there Black Pinups? Yes.