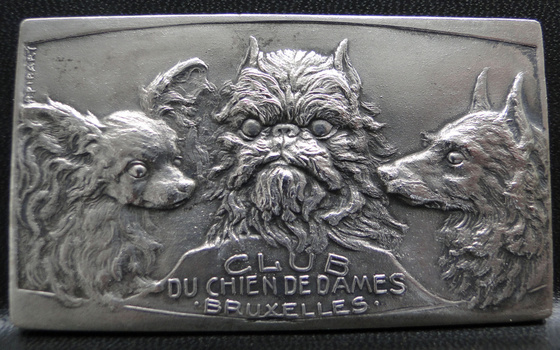 In honor of all the beautiful and noble dogs who presented at Westminster this week… I post this beautiful old silvered bronze art medal(*), designed by Belgian medal artist René Pirart for the Club De Chien De Dames Bruxelles. Pictured are the Papillon (note "Butterfly" ears), the Griffon Bruxellois (center), and the Schipperke.

The Brussels Griffon/Griffon Bruxellois was very popular in late nineteenth century Belgium. Queen Marie Henriette was enchanted by the little lion-hearted dog, and she regularly attended the dog shows in Belgium. The Queen and her daughter also bred the Brussels Griffon, and helped bring the breed to international popularity.

I don't know the following: in what year the medal was designed, for how many years it was issued, and what purpose this particular medal served. Often one finds circular dog show medals that feature a show rank on the reverse. These were given as awards. On this medal, there is no writing on the reverse.

For more on the BG/GB:

(* ) Strictly speaking, medals are supposed to be circular. This oblong medal might be called a plaquette.

Note: This is not sterling, but it is silvered.