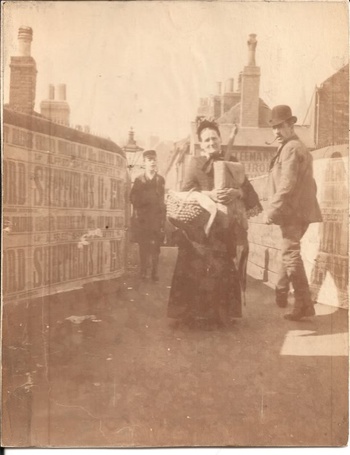 This old photograph was another score from an ephemera auction (there's a company here that runs them quarterly - always cool finds to be had.)

I posted the pic on a couple of sites, and was able to find out an amazing amount of information. The most helpful part in identifying where and when the picture was taken came from the broadsides posted in the background, which say, in part (bracketed text has been filled in, although not visible in the photo):
"...[TREN]T BRIDGE GROUND MONDAY MAY 16th"
"ALFRED SHAW'S BENEFIT"
"...[LO]RD SHEFFIELD'S 11 V. E[NGLAND]"

After much research by myself and others, the city has been identified as Nottingham, and it has been dated to 1892. The original photo is approx. 4"x5", mounted on some sort of cardboard (which I understand is fairly standard for amateur photos of the day), and is somewhat curved.

Alfred Shaw was a professional Cricketer, born 29th August 1842, died 16th January 1907. He apparently fell on some hard times, and two benefit cricket matches were held to raise funds for him, the second of which was the May 1892 match.

Pete Griffith, who maintains the online Cricket Archive, pointed me to this information: http://cricketarchive.com/Archive/Scorecards/3/3791.html

According to Pete, "[Shaw] received £130 from it, rain interfering with the match. (It was his second benefit match, the first, in 1879 produving £150 and also being rain-hit.)"

One of the sites I posted the pic on is forensicgenealogy.info - it was put up by the administrators as one of their weekly quizzes. The photo was also picked by site users as the favorite quiz from August 2007-August 2008, and there was also an August 2008 blog post which compiles even more details their users put together. It's astonishing how much information that can be developed just from the details of a photograph!