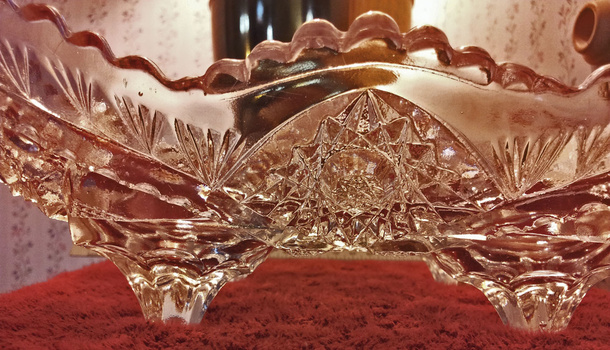 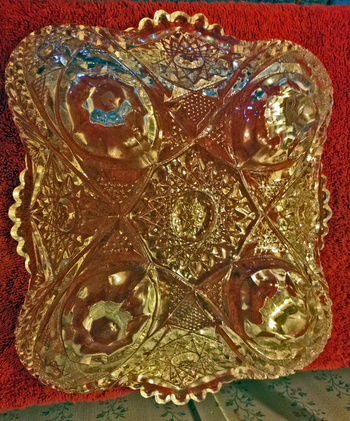 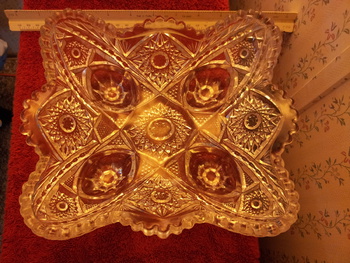 My mom gave me this dish before she died. She told me her mother in law (my paternal grandmom) gave it to her. Later my father said his grandmother(my great grandmother)gave it to his mother. He went on to tell me that she used to tell him stories about living during the Civil war as a young teen. She lived near what is now known as Bentonville Battleground in NC, and recalled hearing the actual Battle of Bentonville. Another time, an officer in the Union Army walked into the her kitchen, looked in the pot cooking on the stove, then turned to the soldiers and said, "Looks like we're having boiled potatoes for supper, boys."
Sorry about the lengthy story but that is one reason this dish is special to me. Most likely she acquired it long after the war ended but to think that it was once held by my great grandmother who, lived during such an important period in history makes me feel a real connection to that time. Of course it is entirely possible that my dad was mistaken and the dish never belonged to his grandmother.
I have run online searches for Hobstar glassware many times over the years and have only once, found a dish similar to this but I've never found one exactly like it. It is rectangular shaped, clear glass, and has four little"feet" underneath. I would love to know how old it really is, what it might have been used for and any other information anyone could provide.