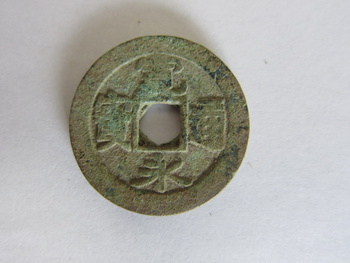 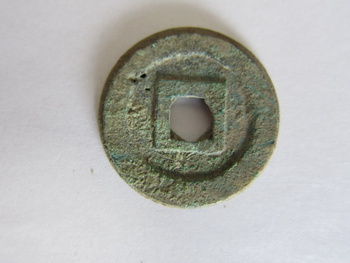 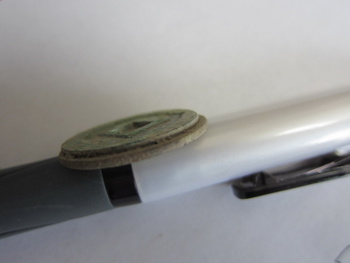 My husband has been the caretaker of the small family graveyard here in Japan for many decades. The earliest known ancestor resting their bones there dates from 1684 but that is only as far back as records show and it probably pre-dates that by quite awhile. After weeding, cutting back brush, and whatnot, he washes the tombstones, places cut flowers, lights some incense, and says some prayers and tells the ancestors about what is going on in our lives. He must have made a mention about his impending retirement and worries about finances because in the past year or so he has found a few coins dating from the 17th century as if the ghosts of the ancestors have decided to share their wealth. ;-) Here is a "Kanei Tsuho" dating from sometime after 1636. Well, actually it appears to be 2 coins that have become adhered together over the centuries in the harsh coastal elements. As you can see in the second photo, the backside has a few pinholes where the metal has severely degraded over time. The side view photo shows the slight difference in size between the upper and lower layer. The central hole functioned as a way to string one's money together for safe keeping. So perhaps someone suffered a break in their moneybelt in ancient times or these coins were buried for safe keeping and then lost to time... They are a bit of a mystery as to why they ended up where they were. In today's world, the custom in Japan does not include sending money for the afterlife as it does in China anyway.