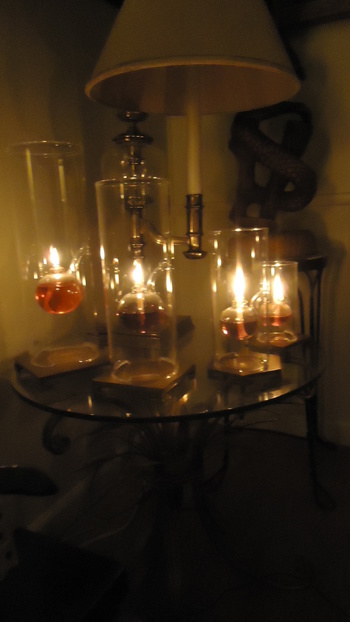 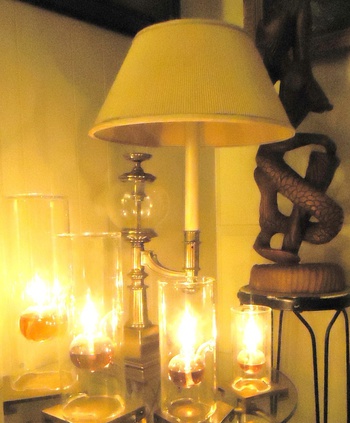 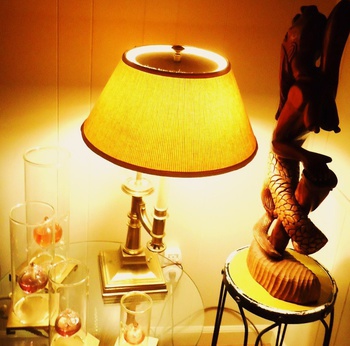 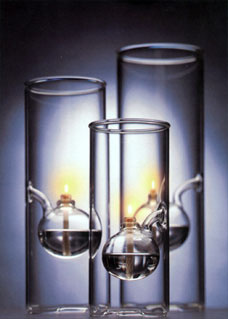 He lives about 15 minutes from my house, but my mother bought these in the 1970's, I broke two of them moving so much, and found him on the internet. But I found replacements on Ebay for really cheap! It said he was working for a research company. A friend of mine said he was designing new glass Chemistry and such items, hand blown. Mustangtony says only oil lamp can fill while lit! From Wolfard website!
In 1972, Linda Wolfard received a handblown glass oil lamp as a gift from her husband Jon, a glassblower at a local research company. The original oil lamp became a centerpiece on their coffee table where friends constantly remarked about Jon's unique design and requested lamps for themselves.

With much encouragement, Jon converted their garage into a glassblowing studio and began a small-scale company. Linda carted the lamps along with their new daughter to art shows in parks, malls, and later to gift stores. http://wolfard.com/index.html HELLO They are really top rate! beautiful. And if no long matches or lighter, use spaghetti! it works great!! Thanks for looking oh the mermaid is Oshun or close, Africa legend. wood carved! I love her! Last photo from his website!
The Wolfard Oil Lamp has earned an international reputation for excellence in design and function. It has been included in the prestigious Whitney Museum of American Art exhibition "High Styles: Twentieth Century American Design," a review of outstanding examples of furniture, industrial design, and decorative objects.

The Wolfard Oil Lamp is hand-blown from borosilicate glass (known for its strength and clarity) using an exclusive "in-flame" glassblowing technique which requires higher temperatures than other art glass methods. This, in turn, requires a higher degree of skill by the glassblower to form the lamp while the glass remains workable.

Whether in your home or in a world class museum, Wolfard Lamps bring style and elegance to any room. All are beautifully hand-crafted and designed to be treasured for generations. Thanks for looking Don