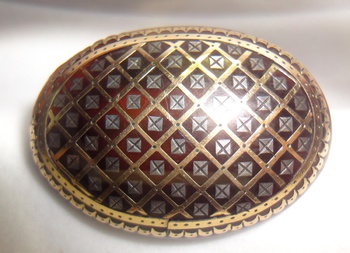 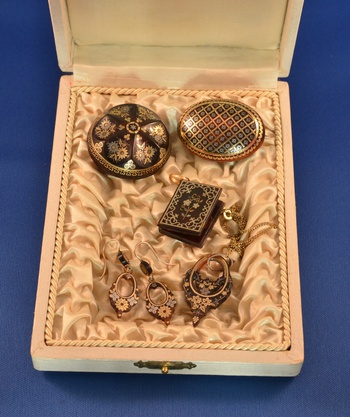 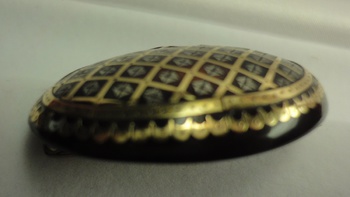 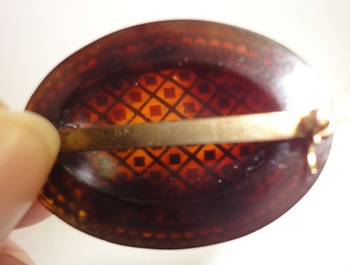 Piqué jewelry is a style and type of jewelry all unto itself. It was most popular during the Victorian era and it can be found as far back as the 18th Century. Piqué (pronounced “pee-kay”) is gold or silver, or sometimes a combination of both, inlayed into another material.
Often the material was tortoiseshell (Hawksbill tortoise) and was also used for the making of other tortoiseshell material such as fans, boxes etc) sometimes even from elephant ivory. The tortoiseshell seemed to be the most popular, probably because of its light weight and being easy to “mould” into other shapes. Tortoiseshell is a natural thermoplastic , meaning that it is quite malleable when heated/warmed. Very fine gold or silver would be fashioned into either fine “rods” or “leaf” designs and the pressed into the already warmed tortoiseshell. After the gold and/or silver was set, the shell was left to cool down which would then contract to hold the metal in place. Prior to 1870, the metals were cut by hand allowing for very fine and intricate detail then after 1870, machines started to do the work resulting in more straight and angular designs. Piqué jewelry can most commonly be found in earrings and pendants, and the designs and coloring are amazing to admire. It is fantastic for the animals (turtles) that the use of their shell is prohibited since the beginning of the last century. But it is unfortunate that this type of jewelry is not currently very popular because they are all masterpieces of craftsmanship and patience. This form of jewelry making is now a lost art as both the elephant and Hawksbill turtle are protected species, meaning that piqué jewelry will become harder and harder to find as the years go by.
Measurements of this brooch: 1.7 x 1.2 " and a safety pin.
On the second photo I already showed you earlier on CW you see my other Piqué jewelry amongst others a very large and special inlaid brooch. A demi-parure, earrings and pendant and a little locket which can be opened and place for two photos, very special!