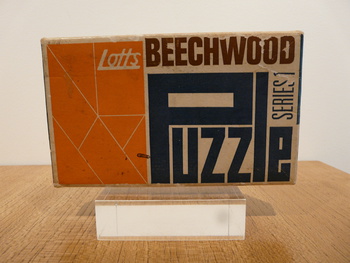 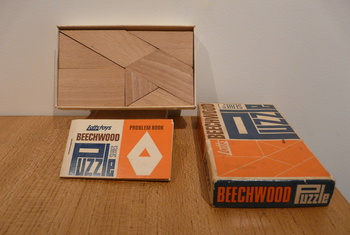 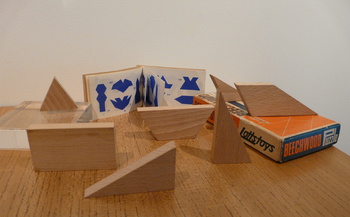 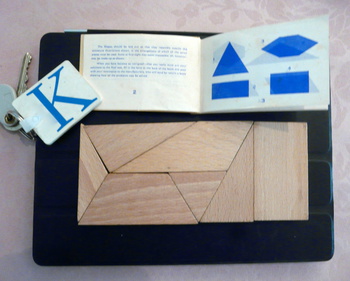 At the local Salvo's there is a junk box where they toss the 'less than desirable' items. I have no idea who is the one who makes these decisions. But I have found it an area to trawl through on occasions. My Mambo clock came from this table of 'flotsam and jetsam'.

The packaging on this item caught my eye.

The elastic band round the box suggested that the contents might be intact. But the packaging itself was interesting. I opened it up and the pieces were all there. All seven of them. Nice wood too! The problem book was inside with nice blue silhouettes of the 105 puzzles and these comments:

"Relaxation and amusement without expending energy is the chief charm of all puzzles ..... The puzzles being cut from kiln dried American beechwood are very pleasing to handle - with their clean cut edges and smooth surfaces."

The memories flooded back too when I saw those wooden pieces. They reminded me of the German wooden block sets that I had as a young boy. I think one of them is still downstairs. I've got to go and find it!
I got home and went to the internet to find out about Lott's Toys Ltd., Pottington Industrial Estate, Barnstaple, North Devon.

What I discovered was that this puzzle was based on an original German toy produced by a company called F. Adolph Richter and Co in 1899. Originally this puzzle was not made out of wood but out of "Stone". Richter made blocks from a mixture of kaolin clay, sand, and linseed oil, based on a formula patented by Otto Lilienthal. The puzzle was part of a line of "Anchor Stone Puzzles" in 1882. Originally it was called "Sphinx". Later it was marketed as "Butterfly" too. It was number 15 in the series that Richter produced. These original stone puzzles are highly collectible and fakes abound on the auction sites.

What surprised me was that these stone puzzles were a craze on England and Europe from the 1890's. It seems that these puzzles were taken by soldiers on both sides and enjoyed in the trenches during WWI. They were the Rubik's cube of their time.

Any geometric shape can be dissected into pieces, and the pieces re-arranged to form fanciful figures.

The pieces are just seven! This puzzle is based on a rectangle that is cut into seven pieces:
1 equilateral triangle
1 obtuse isosceles triangle
2 right scalene triangles
1 rectangle
1 isoseles trapezoid
1 scalene trapezoid
"With these 7 pieces, a wide array of investigations can be conducted from kindergarten through high school, including visual problem solving, attributes of polygons, the difference between congruence and similarity, measuring angles, as well as calculating perimeter and area."

Tangram research too me to the other fourteen Richter puzzles and to the Chinese puzzles and the loculus of Archimedes aka Ostomachion. A whole new range of things to look out for as I wander round the op shops.