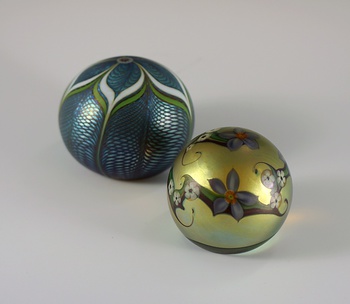 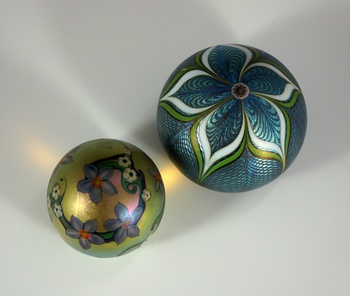 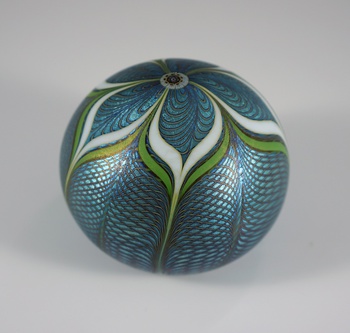 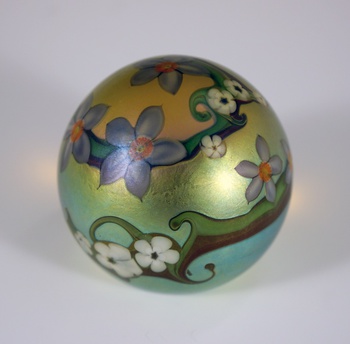 The company of Orient & Flume was founded in 1972 at Chico, CA, by Douglas Boyd and David Ballentine Hopper. They set up their first furnace in Boyd’s backyard, which lay between Orient Street and Flume Street hence the company title. It was at this location that Douglas purchased a historic carriage house and transformed it into an art glass studio. Orient & Flume’s stunning art glass creations quickly became popular and by 1973 the business had grown too large for the small carriage house. The company was then relocated to Park Avenue in Chico where it remains to this very day. The company regularly drew in other artists with various skills in working glass, including Kathy Orme (a designer who still does sand-carved glass in Chico), Lubomir Richter (a Czech-trained glass engraver who works for Steuben), Dan Shura (an ivory scrimshaw artist now living in Canada), Daniel Boone (a stained-glass artist who now has his own studio in Chico), and Bruce Sillars (a designer and glassblower employed by the company). Orient & Flume specialized in recreating the outstanding achievements of famous American companies, such as Tiffany “cypriote” glass and Steuben aurenes. While the body of their work is largely a riff on American art nouveau, by 1978 they were experimenting with more contemporary styles. Orient & Flume’s early blown glass creations centered on recreating the iridescent glass pieces made famous by such companies as Tiffany, Steuben, and Loetz.