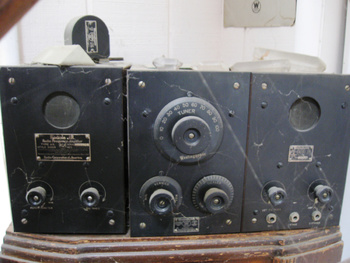 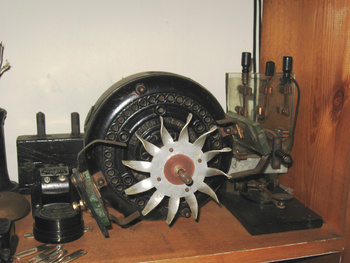 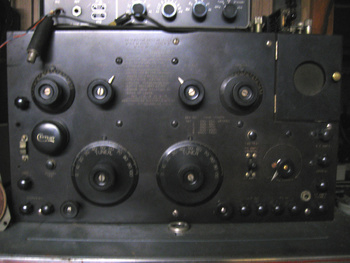 Left to right: (1) Westinghouse Type DB Detector - you can switch between quartz and lead crystals. (2) Westinghouse AR, RADA, and Type CB Loading Coil. The loading coil moved the reception into what was considered "shortwave" - now the standard AM broadcast band. My grandfather helped Donald Little, Forest Mabry, and E Howard Armstrong with the design of the AR rf Amplifier. He once said of it, "If you were lucky, you could achieve a gain of 1". (3) The rotary spark gap, switch, and key were part of my grandfather's ham set when he was 1QX. He was keying the high voltage side, and made the key contacts using two silver dimes. Spark was provided by a Packard ignition coil. The motor is an Emerson Induction Motor, and operates on 60 cycle (oops! Hertz) 110vac house current. (4) The Westinghouse RS was used for internal plant-to-plant communications. This particular one was "liberated" by Donald Little, when he transferred from Pittsburgh to the Wilkins Ave Baltimore Plant. Don Little was the station broadcast engineer at KDKA when they broadcast the returns in the 1920 Presidential Election. E Howard Armstrong remained at his home broadcast station, standing by to take over if KDKA had transmission problems and went off the air.