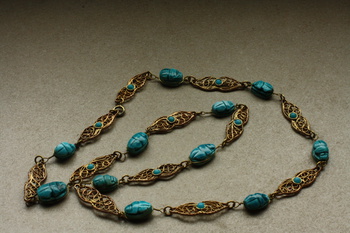 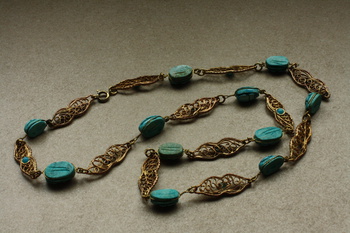 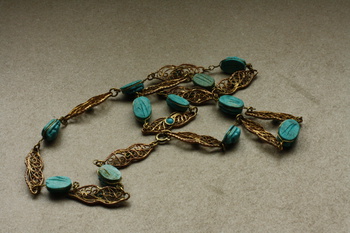 I found this necklace this weekend at an indoor flea market. I bought it for 5 euro's and I was thrilled!
Its so cold here and its almost spring, I hate it. But this necklace was able to warm my heart.
Its a gold tone filigree necklace with eleven scarab's. The scarabs are made from faience and they all are different in size and shape so I guess those are hand made.
The scarabee was a good luck sign in ancient Egypt. The fact that these scarabs are from faience has also something to do with rebirth and good luck. So it wasn't just to be cheap ;-)
The way the scarabs are attached to the necklace is very different. There is a wire that is kinda 'wrapped' around them. I have never seen that anywhere...
I know there was a big Egyptian revival in the twenties when Tutanghamun's tomb was discovered and the fact this necklace has some filigree in it makes me think its actually made in the twenties or thirties.
But I'm also aware there was a second big Egyptian revival in the seventies...
The clasp doesn' t seem very old to me...
And I think till today they still make this sort of scarabs to sell to tourists.
So, does anyone know the age of this necklace? Twenties of seventies?
Thanks a lot!