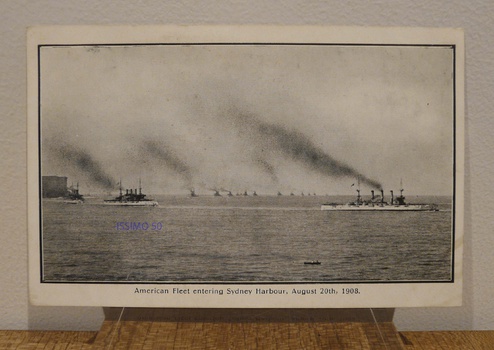 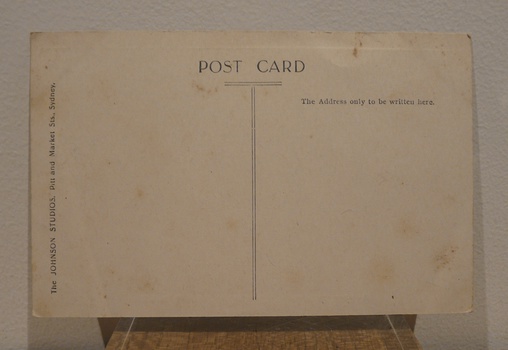 In August 1908 a “little after 11:30 a.m. the USS Connecticut passed North Head and entered Sydney Harbor, firing a 21-gun national salute." Fifteen battleships, all of them painted white, followed her into the harbour and anchored around the port. It had been declared a public holiday and over half a million Australians came to welcome Teddy Roosevelt's Great White Fleet.

Check out those two blokes in the row boat in the foreground!

This is one of three cards I have from a series of cheaper cards produced for the market here in Australia after the arrival of the Great White Fleet in 1908. This card is one of two that I have from an Australian set celebrating the event. It was collected by Maude Lankester. This one was not used. The photo was taken by William Johnson I believe and was put into production immediately for sale to the US sailors and the Australian population eager to buy souvenirs of this historic event.

On the reverse of my two cards is the identity of the studio that produced them. They are by “The Johnson Studios, Pitt & Market Sts”, Sydney, Australia. I believe the firm was run by Johnson, William, (1897-1921). The full address is W. Johnson, Bank Chambers, 61 Pitt St., Sydney.

Associated place and context: "The "Great White Fleet" sent around the world by President Theodore Roosevelt from 16 December 1907 to 22 February 1909 consisted of sixteen gleaming, white modern American battleships & their escorts, that later came to be known as the Great White Fleet. The fourteen-month long voyage was a grand pageant of American sea power. The squadrons were manned by 14,000 sailors. They covered some 43,000 miles and made twenty port calls on six continents.

The fleet was greeted with excitement around the world. In port after port, citizens in the thousands turned out to see and greet the fleet. The fleet travelled to San Francisco, Honolulu, and Auckland before entering Sydney Harbour on August 20th, 1908 where they remained until the 27th. Following Sydney, the fleet arrived at Melbourne on August 29th and remained until September 5th when most of the fleet left for Albany. The visit was a vast occasion in Sydney and Melbourne, crowds of between 400,000 and 600,000 turned out to welcome the fleet. They arrived at Albany on September 11th and remained until the 17th when they departed for Manila. A number of events, from balls, sports days, city parades, and concerts were held in honour of American visit.”