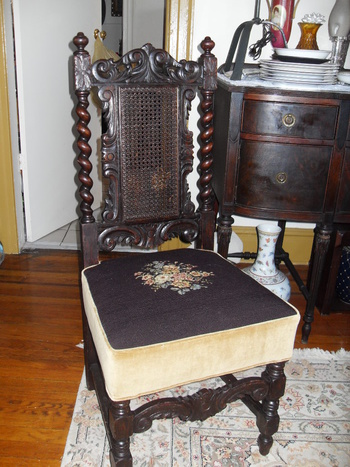 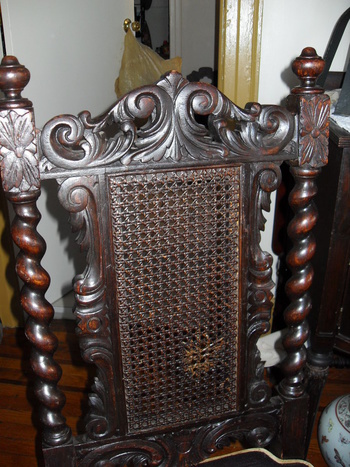 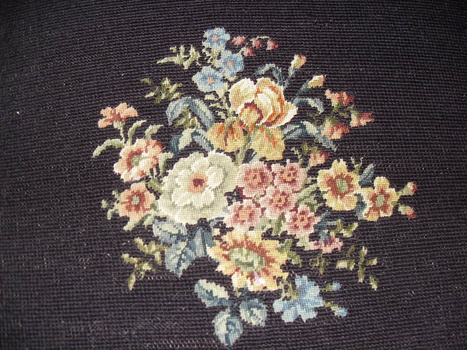 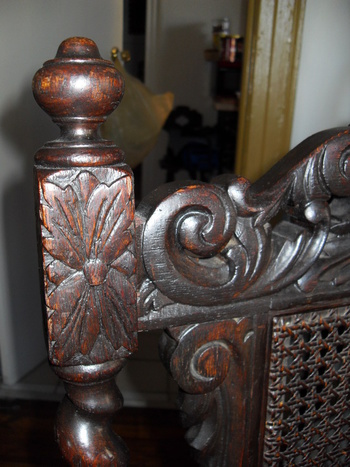 This is an 18th century style oak chairs with barley twist upper posts has a caned back. The seat is newly rebuilt and upholstered with beige and dark wine hand stitched floral designs. The chair is beautiful decorated with carved with foliage.

The Jacobean era refers to the period in English and Scottish history that coincides with the reign of King James VI (1567–1625) of Scotland, who also inherited the crown of England in 1603 as James I. The Jacobean era succeeds the Elizabethan era and precedes the Caroline era, and specifically denotes a style of architecture, visual arts, decorative arts, and literature that is predominant of that period.
The word "Jacobean" is derived from Jacobus, the Latin form of the English name James.
The practical if not formal unification of England and Scotland under one ruler was a development of the first order of importance for both nations, and would shape their existence to the present day. Another development of crucial significance was the foundation of the first British colonies on the North American continent, at Jamestown, Virginia in 1607, in Newfoundland in 1610, and at Plymouth Colony in Massachusetts in 1620, which laid the foundation for future British settlement and the eventual formation of both Canada and the United States of America. In 1609 the Parliament of Scotland began the Plantation of Ulster.
The most notorious event of James' reign occurred on 5 November 1605. On that date, a group of English Catholics (the most famous, in later generations, being Guy Fawkes) attempted to blow up the King and Parliament in the Palace of Westminster. However, the Gunpowder Plot was exposed and prevented, and the convicted plotters were hanged, drawn, and quartered.
Any and all additional information pertaining to the chair is welcome. 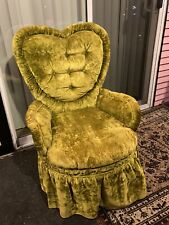 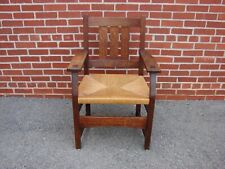