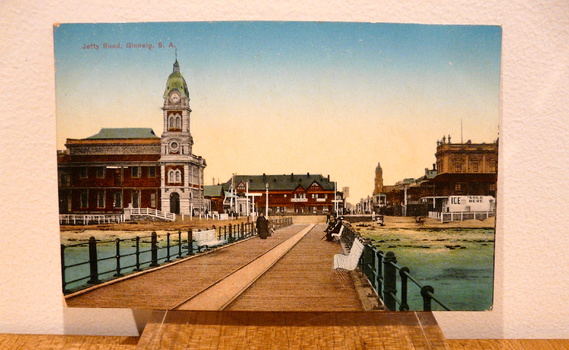 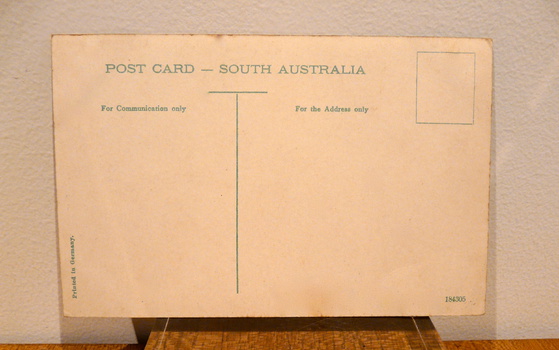 This is the second South Australian card from the Maude Lankester collection that I recently bought here in Sydney Australia. Maude came from a wine making family and it is not surprising that quite a few cards from her collection come from wine-growing areas around Australia. South Australia is one such area and Maude may well have received this postcard from her sister Mrs T. Nelson who married and lived in Claremont, Glenelg.

Glenelg is a wonderful example of a palindrome, no?
Scottish originally.

The beach at Glenelg was (and still is) a popular destination for the residents of Adelaide to get some relief from the heat. The 381 metre long jetty shown here has benches for those who went for a promenade over the waters of Holdfast Bay. From 1929 you could take a tram from Adelaide down to the Jetty shown here. But this card can be dated to around 1912 because of the new Pier Hotel on the right. The high Victorian architecture of the Town Hall on the left also gives the time of day. An interesting detail is the perambulator to the right of some women resting on some logs on the beach sands.

Maude’s collection of early 20th century postcards is a pictorial record of urban and rural landscape in South Australia, Victoria and New South Wales. The cards capture the social and political attitudes and observations of a country family from Albury, revealing much about domestic and social life, politics, and Australian culture of that period just after Federation. Themes such as nationalism, the position of women, global shipping and communication are also referenced by both the visual iconography and the commentary on the postcards.

Associated place and context:
Glenelg is a popular beach-side suburb of the South Australian capital of Adelaide. Located on the shore of Holdfast Bay in Gulf St Vincent, it has become a popular tourist destination due to its beach and many attractions, home to several hotels and dozens of restaurants.

Established in 1836, it is the oldest European settlement on mainland South Australia (the oldest being Kingscote on Kangaroo Island), with the proclamation of the colony of South Australia. It was named after Lord Glenelg, a member of British Cabinet and Secretary of State for War and the Colonies.Through Lord Glenelg the name derives from Glenelg, Highland (previously Inverness-shire), Scotland. In Scottish Gaelic the name is Gleann Eilg.
http://en.wikipedia.org/wiki/Glenelg,_South_Australia

Pier Hotel on right. The first building on this site was Moseley’s Pier Hotel (1856). In 1912 the original hotel was demolished and a 3-storeyed building with elegant balconies? and verandahs erected. On the left of the card is the Town Hall which today houses the Glenelg Museum. They too have a copy of this card.

The 381 metre Jetty was built in 1859. In 1873 the lighthouse that was situated at the end of the jetty caught on fire, completely destroying it. Then in April 1948 Glenelg was hit by a hurricane and the jetty was washed away. This only left the kiosk and aquarium , which was unsafe and therefore had to be demolished. In 1969 the jetty was rebuilt, but this time only being 215 metres long. As you can see the Jetty has had a few changes occur over the years. The jetty was used not only by fishermen but also to accept cargo from ships, including a mail service operated by P&O, until Port Adelaide replaced it as Adelaide's main port.
http://glenelgsa.com.au/history