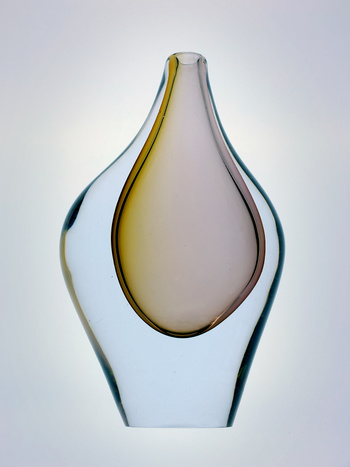 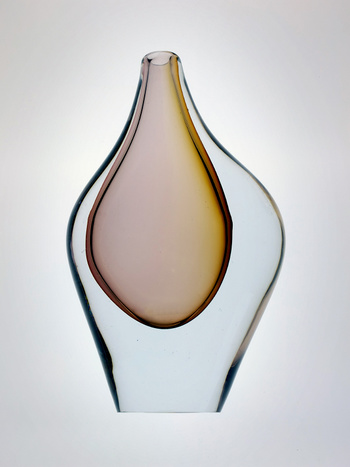 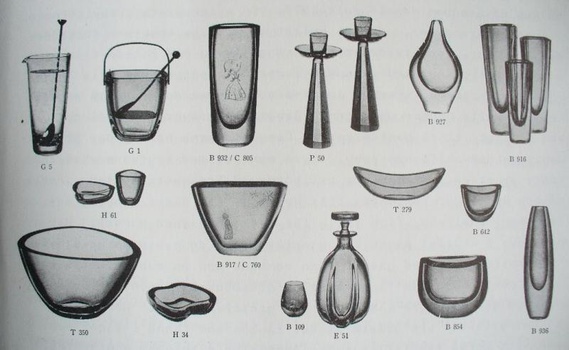 Gunnar Nylund, artistic leader for Strombergshyttan 1952-56 and later as freelance. This assymetric sommerso vase in colored underlay has the number B 927. Height: 185 mm. The price list for B (Blomvaser = floral vases) in the catalog from 1962 ends at number B 974. The glass models from 1962 must be designed not later than 1961, so I think 1958-1959 is approximately right time for this model B 927.

The assymetric air bulb recurs in several compositions by Nylund from the mid to late 1950s. Underlay color is here a copper-toned nuance (changing to golden yellow on the side) which I don't know the code for. 1962 you can get the vase in x 73 golden yellow, x 76 smoke-grey and x 77 brown. In the catalog from 1954 you can also have som beer cups in other colors, for example x 51 (a pink nuance), maybe it's this one used in the underlay here?

I hope to find others of this Nylund sommerso models from late 1950s, especially the vases with assymetric air bulbs fascinates me. I also love the well balanced color underlay Strombergshyttan used. The colors are often restrained and stylish in comparison with those used in sommerso vases from many other contemporary glassworks.

To the right: A selection from Strombergshyttans range - with model numbers (probably pictures in a catalog from 1958-1960). There are models design by Gerda Stromberg, Asta Stromberg and Gunnar Nylund.

Edit 2013 07 03:
Due to recently found facts, this can be a Nylund-inspired model by Asta Stromberg. The year of release speaks more to Asta, or this is a late released model by Nylund (Nylund was not working for Strombergshyttan 1957-66) what I can see from documents I have found)?