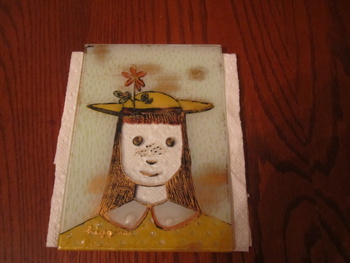 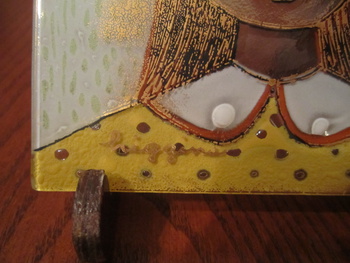 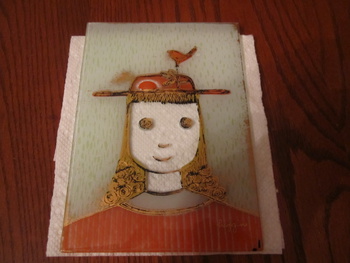 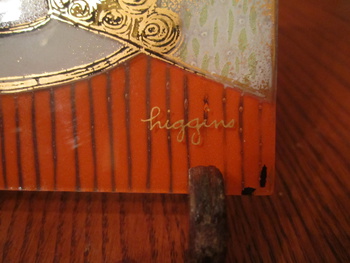 The Higgins Studio, home of “modern miracles with everyday glass” was founded in 1948 by Michael and Frances Higgins. Today, the miracles continue, under the leadership of the Higgins’ chosen successors, Louise and Jonathan Wimmer. This direct line of continuity means that glass objects in the distinctive Higgins style will continue to enchant collectors for many years to come.

Michael and Frances Higgins, who met at the Chicago Institute of Design, were pioneers in the rediscovery and refinement of the ancient art of glass fusing. Because it is so labor-intensive, fusing had, by the mid-twentieth century, been all but abandoned in favor of glass blowing. Essentially, fusing is the creation of a “glass sandwich”. On one piece of enamel-coated glass, a design is created, either drawn with colored enamels, or pieced with glass segments. Over this, another piece of enameled glass is laid. Placed on a mold, the object is then heated. Under heat, the glass “slumps” to the shape of the mold. The design itself is fused between the outer glass pieces, with additional layers often adding to the texture and color complexity.

Originally the Studio operated out of the Higgins’ Chicago apartment, with kilns set up behind the sofa. Everyday items, such as bowls and plates, were transformed, through an arresting mix of geometric and curved lines, and bold use of color, into objects still useful, yet also visually vibrant and exciting. Promoted as “an exclamation point in your decorating scheme”, the unique blend of artistry and practicality that Higgins glassware offered quickly attracted buyers. Working round-the-clock in split shifts, Michael and Fran met ever-increasing orders from such major retailers as Marshall Field’s, Georg Jensen, and Bullock’s Wilshire.

Their Studio operation moved to more traditional surroundings in 1957, thanks to a partnership with Dearborn Glass Company of Chicago. The Higgins name received national exposure through Dearborn’s extensive, and heavily promoted, line of “Higginsware”. The line included, in addition to a full range of tableware, everything from lamps and ashtrays, to candleholders and Rondelays. (These fused glass circles and squares designed to attach in sections, for use as room dividers, window treatments, and other décor applications, are still staples of the Higgins Studio today.) The richly varied output of the Higgins Studio has also included, at one point or another, clocks, bookends, paperweights, glass-topped ceramic dishes, tables, Christmas ornaments, jewelry, “dropout” vases, wall plaques, mobiles, free-standing sculptures, mirrors, church windows, room dividers, and even exterior building ornamentation. Imagine what can be done in glass, and the Higgins Studio has probably done it!

In 1966, following their Dearborn tenure, and a brief stay at Haeger Potteries, Michael and Frances Higgins elected to return to private studio work. Here, they were free to set their own goals, meet their own standards, and design in the direction their hearts and minds led them. Since 1966, the Higgins Glass Studio has been located in Riverside, Illinois.

Michael Higgins died in 1999, Frances Higgins in 2004. The Higgins Studio is now, as per the Higgins’ wishes, under the ownership and direction of longtime design associates Louise and Jonathan Wimmer. The Wimmers, as well as other members of the Studio family, were trained in the Higgins technique of fused glass design by Michael and Frances, and now teach these same pioneering methods to new members of the Studio staff. Louise Wimmer, who joined the Studio in 1978, learned the intricacies of glass decoration from Fran, soon becoming an accomplished decorator in her own right. Jon first experienced the Studio as a child, joining his mother Louise there after school. His interest in working with glass soon attracted the attention of Michael, who became his mentor. Today, Jonathan’s bowls, plates, mobiles, and other pieces, which build and expand on Michael’s techniques, are avidly sought by collectors. As Jon notes, “we are really the only ones in the world that do this. There are a lot of people that fuse, but nobody else has the glass. We make our own. Everything is unique to the Higgins Studio. We want to keep what we do one-of-a-kind handcrafted art.”

Today, Higgins Glass, at 33 East Quincy Street, is part of the Riverside fabric of life. The Studio is open year-round, and collectors particularly look forward to the Holiday Open House, which, for over fifty years, has been held on the first Friday evening of each December. Higgins pieces are included in the collections of, among others, the Smithsonian, the Metropolitan, and the Corning Glass Museum. The Studio is also the subject of the books Higgins: Adventures in Glass and Higgins II: Poetry in Glass. More than fifty years on, Higgins glass, an “old craft for modern tastes”, continues to fascinate.

Frances and Michael Higgins always looked toward the future. Thanks to their foresight, and the expertise of their successors, new generations will be able to experience both the heritage—and the future—of Higgins glass. The “modern miracles” live on.

“This is just what our lives steered us into doing for our joint living, and we like it most of the time. That’s enough. Here we stand.” --Michael Higgins

“We just try to make what looks good—anytime, in any place. Things that are lasting, and can be enjoyed for years to come.” --Frances Higgins