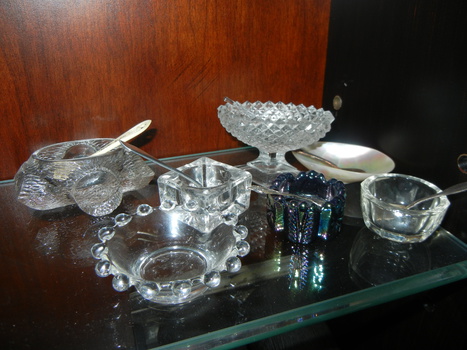 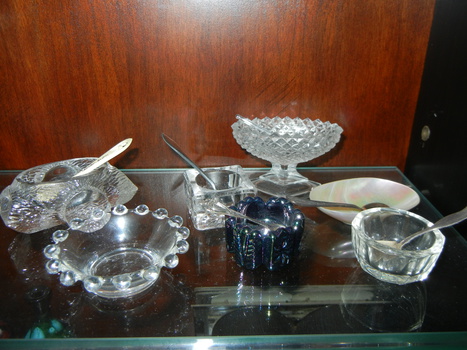 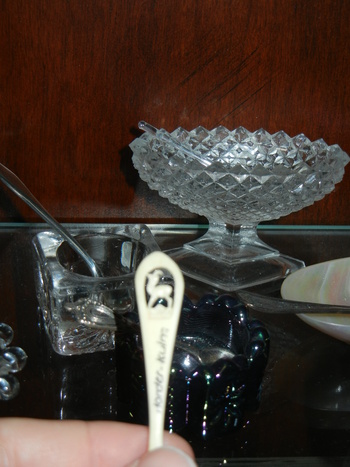 Years ago I would drag my daughter with me to the local antiques market, and I thought she would have more fun if she was also looking for something to build her own collection. For some reason, she chose salt cellars - she was probably 7 at the time, so I found it an odd choice, but they are plentiful and inexpensive, so that's what she started with.

Unfortunately, within a year she moved on to something else (Presidential Campaign buttons) and more recently moved on to costume jewelry, so her initial "collection" just languishes in our front hall.

None of the glass pieces are signed. She has one fewer spoon than cellars, and most of them were purchased independently - except for the one sold with the shell. That one is marked on the back, but we can't figure out what the marks mean. There are two independent marks - one shows "uOp 80K" and the other shows "810mmet" but the "10" is actually (I believe) the Russian character pronounced you. When we did some research we found some on the web marked "910", and I'm thinking that 10 is the you symbol as well, but still don't know what the full marking means.

For the other spoons, two of them are not marked; one is marked "sterling"; one is marked "Shirley" which I believe means it's from Shirley Pewter based in Williamsburg, VA; and the last is a carved spoon with a deer, not sure of the material, which says "Harder-Kulm" (pictured) which we discovered was an area in Switzerland.

Not a valuable collection - nothing cost more than $5 or $10 - but fun to build it with my daughter.