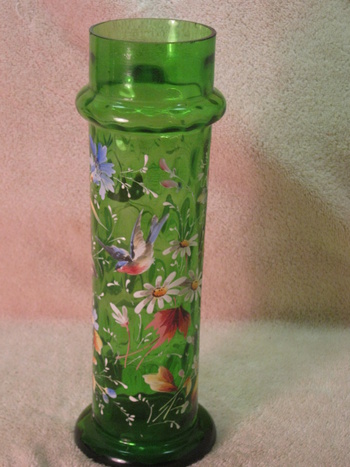 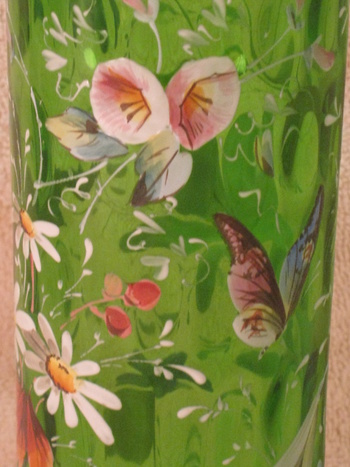 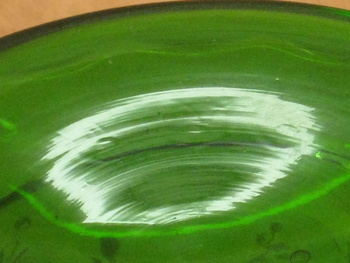 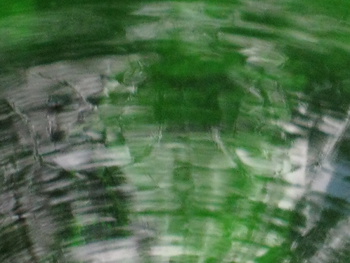 Alright, here is a vase that I acquired at a garage sale some time back. It is a floral enameled vase with birds and butterflies. These are the things I can tell you for sure. The vase is older glass and has wear marks around the rim of the base consistant with an older piece. The enamel to the vase is old. The vase stands 11 1/2" tall. It is green optic glass. There are a few marks on the vase that would be consistant with Galle signatures. In picture #3 you can see what appears to be an E Galle 87 signed in the vase. It is in a bubble style lettering. In picture four you can see and E cross of Lorraine G. There is also a bubble style lettering going around the inner part of the rim that appears to say Emile Galle also and Fet a Nancy, but it is very difficult to photograph and appears to be mostly polished out. It also appears like there is an insect below the signature, but you can't see it in these pictures and then some flowers that go off to the side but they are not in the photos either. This piece may have been enameled on the base as there appears to be remnants of enamel but nothing major there anymore. My biggest concerns on the vase are that Galle tended to sign his name quite legible. My other thoughts are is there anyone doing Galle Repros of enameled glass and did they do them back in the day this glass is from? Thoughts are welcome. I would like to believe it is a real Galle.