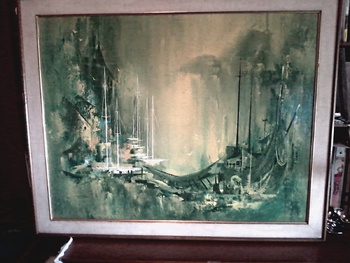 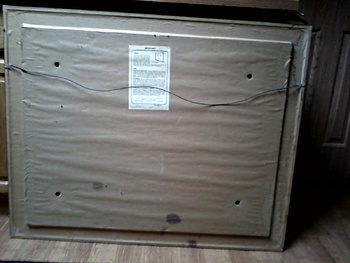 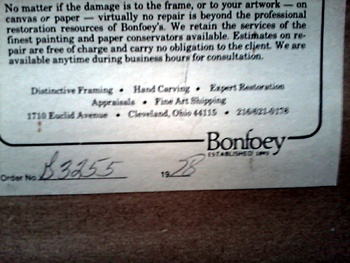 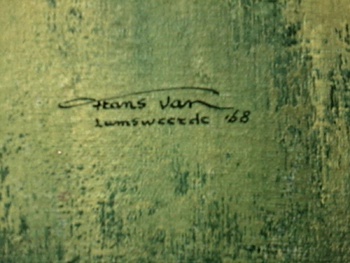 I rescued this from the "Salvation Army Store" The lady told me it had been hanging on the store's wall since she started working there 8 years ago. I asked her if it was for sale and she had to check with the manager. She said yes because they wanted to clear their walls. I said how much and she said 99. I thought $99.00 forget it !! The clerk said 99 ?? and the manager said "yes 99 cents, get rid of it " ! Motioning out the door...lol. I said it's going home with me ! They probably would have thrown it out anyway. It comes from the Bonfoey Gallery here in Cleveland which is still in business. They framed it in 1978 but the print is dated 1968. A year before the artist died. He worked for Disney, Golden Books as an illustrator, and was a comic book artist. The sad thing is unless this is an unknown version of this painting in greens, it has faded badly. All the bright oranges, yellows and blues are faded to shades of mostly blue/ green, pale yellows and white. Don't know what to make of this. There were some water stains on the linen inserts in the frame. I managed to lighten them up a bit with peroxide. A small dent in the canvas as well. I've seen a paper print on Ebay and it's really colorful and not monochromatic like this one. It's heavily varnished and seems to have the right textures but it would have to be very thinly painted to be an oil and that wouldn't fade. Any opinions are welcome . Oh well...99 cents is still a great deal on a 60's retro painting,real or not. - Mike -