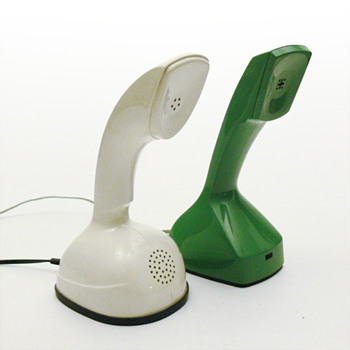 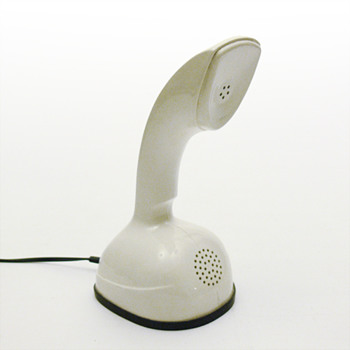 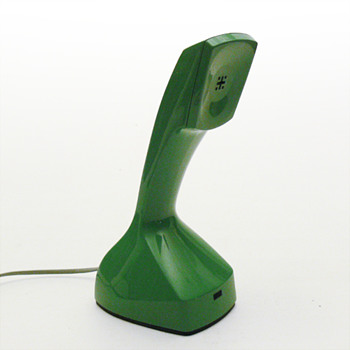 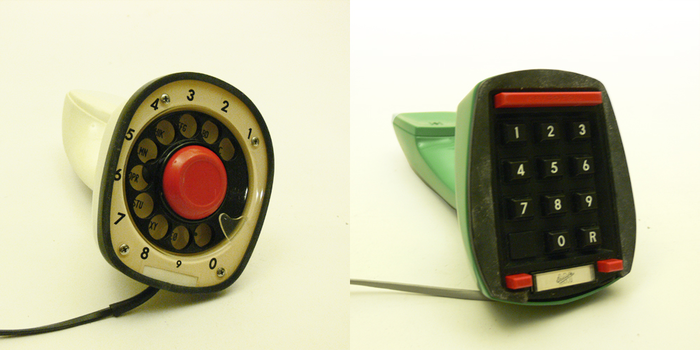 Yes, I am the proud owner of two Ericofons. Who doesn't want to own one of them?

In 1998 I moved to my first appartment (a bit late me being 29 -but not too late for Spanish standards) but I somehow resisted to have a telephone line in it. In the Summer of 1999, when I met my SouthAfrican ex -who by then was living in Tallahassee. Fl... and was not my ex yet-, I made my mind up about having one so we could talk often. And of course, after having started collecting design items, my telephone set couldn't be an ordinary one, so I looked for the Ericofon, and found it at a famous Barcelona design store where they sold original Ericofons.

The Ericofon 700 is a more recent purchase... I guess from about 2008. Well, I needed an extension phone so which could be the ideal one but the 1976 redesign of the Ericofon I already had?

(And now a little copy&paste combination explanatory text for the history of Ericofon ;) )

The Ericofon was designed by Gösta Thames, Ralph Lysell, and Hugo Blomberg, a team of designers working for the Ericsson Company. Its origin dates back from 1941 although it was not commercially produced until 1954. Originally it was intended for institutional use, more specifically hospitals, as the one piece design of the Ericofon seemed to be the best way to call from when one's in bed.

The Ericofon was produced for the European and Australian markets, but it couldn't penetrate the US market because of Bell Telephone's monopoly on the American telecommunications market. Bell absolutely refused to have these "foreign phones" go into use on their circuits and a lot of hype and propaganda concerning fears of damage to the system and such were used. But finally Bell allowed limited institutional use of the Ericofon, but still charging phone rent as though they had provided the phone. These were originally offered in 18 colors, but around 1961 the offering of colors was narrowed to 8.

Around 1960, Ericsson had made a design modification to the Ericofon to accommodate a new molding method making a one piece shell instead of a two piece shell, which caused the phone to be a bit shorter and putting more of an angle to the receiver end. These are commonly referred to as "old case" or "new case" phones. This is why the American made Ericofons have the illusion of being shorter than the Swedish Ericofons.

Around 1967, Ericsson introduced the first version of the pushbutton Ericofon that used TouchTone dialing, but these models had a poorly designed plastic part in the hook-switch mechanism that broke easily when the phone is dropped on a hard surface, that's why they are rarer to find.

The Ericofon 700 -an upgraded version of the famous Ericofon- was the world's first completely electronic one-piece push-button telephone, and was designed to celebrate Ericsson's 100 anniversary.

It was designed by the Swedish designer Karl-Arne Bregerhad and it's a more sober design than its famous predecessor, and was made in white, blue, orange and green.

Strangely, it was not a market success as its predecessor was.