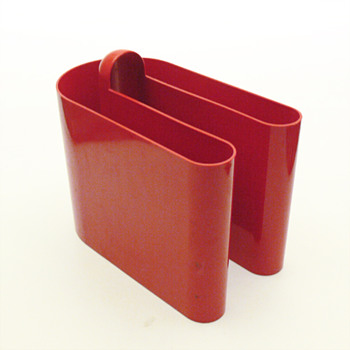 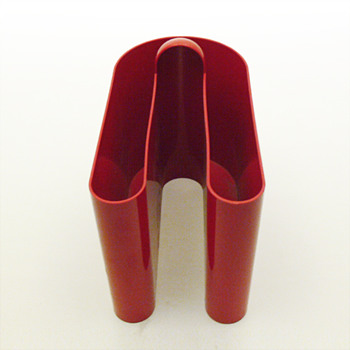 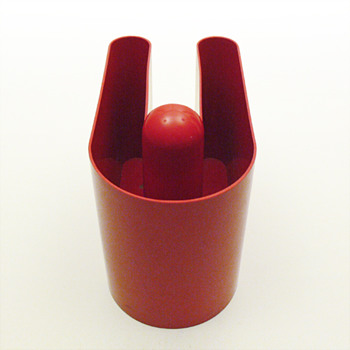 It's a well know fact that a vintage house MUST have a vintage magazine rack... cause yes, they still design them, and there are so many of them in the market but a plastic magazine rack was the thing to have in a modern home in the 1960s qnd 1970s. Carlos has got his (the Kartell Giotto Stoppino's “4676” magazine rack from 1972), and I've got this one: Bonetto's magazne rack!

It is such a practical one! It's made of rotomoulded polythene, and the thing about it is that being 'U' shaped, two elements can be joined together.

It was originally edited by Bilumen. On a pic I've found online at the site Amber told me about (http://www.objectplastic.com/2009/11/bilumen-portariviste-rodolfo-bonetto.html), there is a text: "BILUMEN PORTARIVISTE - design Rodolfo Bonetto - mod depositato - made in italy"), but in mine what I can read is "inicercom PADOVA ITALY - PORTARIVISTE - design Rodolfo Bonetto - made in italy".

They are still being manufactured by B-LINE under the name of BUK.

I am still looking for info about the "inicercom" edition... is it maybe a pirate one? Or is it just the edition between the original Bilumen one and the last B¨Line edition? I have also seen Canadian editions made by Vastill.

The Italian designer Rodolfo Bonetto (1929-1991, born and dead in Milano) began his career as a design consultant for automobile manufacturers. He founded his own firm in 1958 and collaborated with now mytical design compaies such as Brionvega, Bilumen, Siemens, Autovox, valextra, Driade and Olivetti (since 1962). It seems he abandoned a succesful career as a jazz drummer to be a designer.

He was awarded eight gold compasses