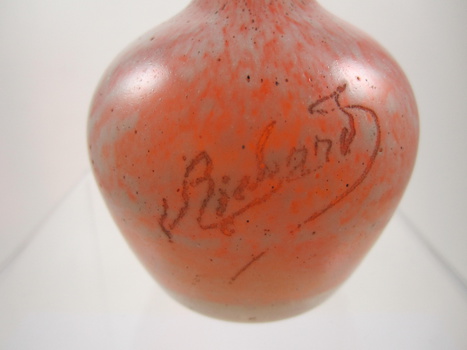 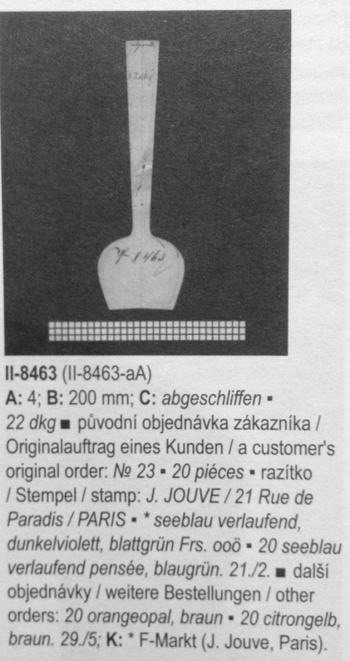 Jitka Lnenickova's Loetz, Series II book of paper patterns for Loetz glass between 1900-1914 yielded another pleasant surprise tonight. The piece photographed here is one I have had in my collection for about a year. It has been enigmatic, because by its appearance and feel, you would automatically think it a French piece. Then, there is the name, Richard, etched into the body in a signature familiar to collectors of Loetz cameo glass. I presented this to my glass collecting friends, and we all kind of scratched our heads over it. Most, if not all, of us had never seen a piece signed "Richard" that wasn't cameo. The second photo above was taken before I cleaned the vase - once I cleaned it, the Richard signature almost disappeared (it is still there, but hard to see without dirt filling the inscription).

Fast forward to tonight - browsing the paper patterns looking for other things when I see the drawing in photo number 3 (PN II-8463). Same shape, same size (200mm, or 20 cm - exactly the height of my vase). The text indicates that the customer's original order was for 20 pieces. It then goes on to list other orders: 20 orangeopal, braun and 20 citrongelb, braun. The order was stamped J. JOUVE/ 21 Rue de Paradis/PARIS.

I don't know if there were subsequent orders, but is it possible that this is one of only 20 made in this color? Also, what is the relationship of the customer, J. JOUVE, to the RICHARD name? Well, in the back of the book, the author indicates that the firm J. Jouve traded wholesale and retail from its firm in Paris, and also "mediated ...orders and consignments for other customers in France". Also, they were permanent agents in Paris for the Loetz firm from November, 1907 until at least 1937, regularly receiving large consignments of glass from Klášterský Mlýn. 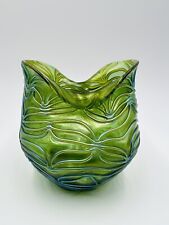 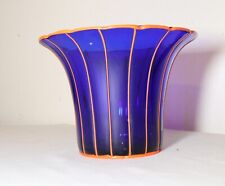