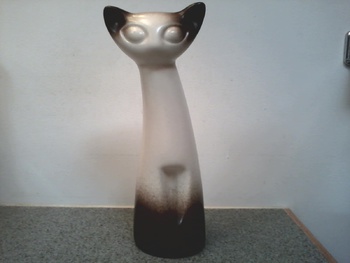 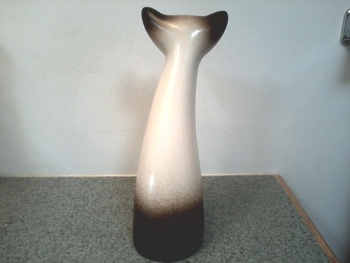 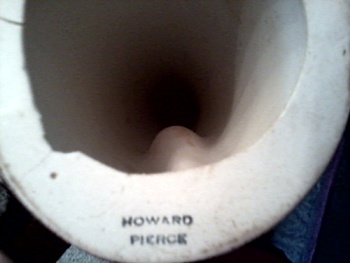 It didn't take long to find today's treasure.I found this in a cart of things waiting to be put out on the shelf at the good old "GW". A Howard Pierce Pottery 10" Siamese cat figure from the 1960's. Wish I could have found it's mate which is an 8" version ,but I didn't see it. Signed on the bottom with a chip and stress crack in the paper thin edges of the hollow. That's the only damage, but who will see it.Oh well, doesn't take much to make me happy and this sure did ! -Mike-

Howard Pierce
Howard Pierce began working in Southern California in 1936. In 1945, he opened a pottery in Claremont. He moved to Joshua Tree in 1968 and continued making pottery until 1991. His contemporary-looking figurines are popular with collectors. Though most pieces are marked with his name, smaller items from his sets often were not marked. Pierce used concrete, plastic, pewter, brass, and plaster as materials for his pieces, but his main material was porcelain.