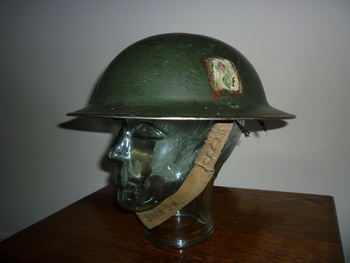 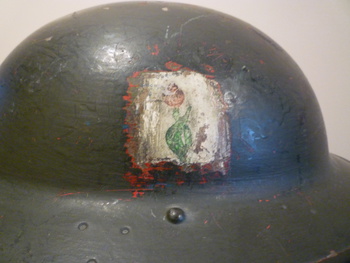 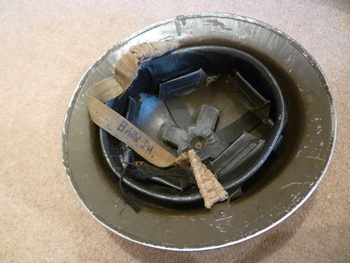 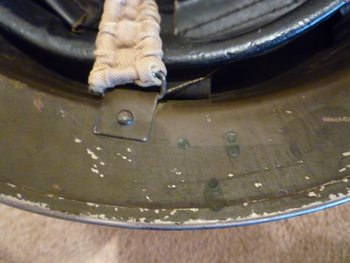 British WWII Home Guard steel helmet. This helmet was lower grade steel as shown by the three holes in each side of the rim. It appears to have been re issued at least twice, or the owner kept it when he transferred. Named on the chin strap, appears to have been owned by a Major in the Home Guard. Unknown insignia.
The Home Guard or Local Defence Volunteers (LDV) was formed in 1940 when there was a real risk that Hitler might invade Britain. The men that served in the Home Guard were all volunteers and were mostly those that were too old (over the age of 40) or too young (under the age of 18) to serve in the forces. They became known as 'Dad's Army'.
The men were issued with a uniform and an armband with the letters LDV to show that they were members of the Home Guard. Members of the public were asked to donate any rifles, pistols or shotguns that they might have to provide the Home Guard with weapons. Those that were not provided with weapons made makeshift weapons from pieces of pipe or knives.
Most of the men had full time jobs and trained in the evenings. As well as preparing themselves to be ready to fight off a German invasion, the Home Guard also guarded buildings that had been bombed to prevent looting, helped to clear bomb damage, helped to rescue those trapped after an air raid, guarded factories and airfields, captured German airmen that had been shot down and set up roadblocks to check people's identity cards.