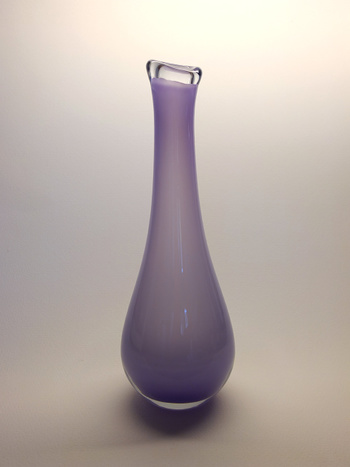 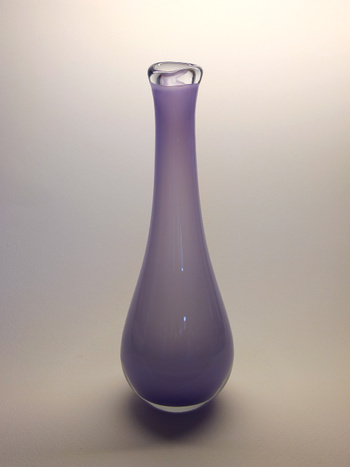 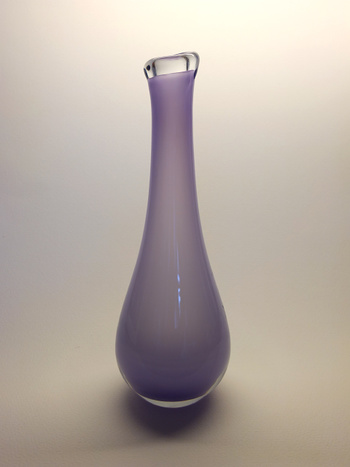 Here is another piece from Gunnar Nylunds production for Strombergshyttan. I have never seen the model before and first I thought of Vicke Lindstrand for Kosta. It is a 255 mm tall vase in light lavender color in an underlay. The model number is unknown, but the vase is marked with a color code X 67 and the text "color test". The color codes from Strombergshyttan is marked with an X and after that a number, therefore I'm quite sure this is a Strombergshyttan model.

There are vases of similar form from other glassworks from 1950s but Nylund's design from the 1950s also includes such models, both in drawings that are preserved and in vase models I have seen. Seora from 1955 and Chimaro includes such models. So that this is a vase from Strombergshyttan and of Gunnar Nylund I think is correct. Everything points to it.

The lavender color here is very beautiful and not so common I think. Probably both the model and the color are quite rare. I guess it has not been manufactured in large series, such as Vicke Lindstrands models with similar shape for Kosta. I'm glad I found this vase for my collection, and in my eyes it must be highly collectible, not least for the next to perfection masterblowers work.

I'm trying to clarify Strombergshyttans unknown history and am delighted every time I come across these kinds of unusual and, as I see it, undocumented items. Now, another piece of the puzzle has fallen in place, (except for the models number). And my admiration for Gunnar Nylund as glass designer rises at the same rate as I can find new models of his signature.