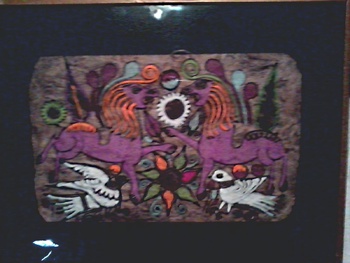 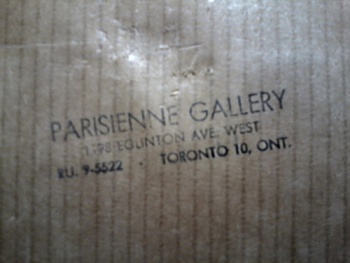 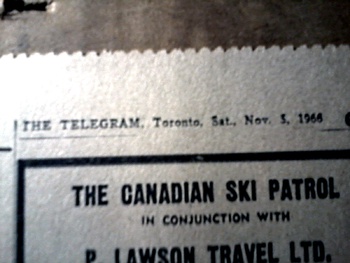 This is another of 4 pieces that I found yesterday. It's a piece of Mexican folk art. A colorful tempra painting on Amati bark paper featuring two rather angry horses and a pair of doves. It's stamped on the back and originally came from an art gallery in Toronto, Ontario Canada (Parisienne Gallery Eglinton Ave ?). I needed to clean the glass so I had to take it apart. Inside was a Toronto newspaper from 1966 used for padding the back and cardboard with postal labels. Seems like some art galleries were into recycling. This is the same kind of material that was used in framing my temple charcoal rubbing. Great way to date things thanks to their frugalness. -Mike-

Amate Paper: Courtesy Home Earthlink.net
The practice of making Amate paper has been kept alive due to its important role in Otomí religious ceremonies and by the Nahua Indians . The bark paper is boiled and soaked over night until soft enough for the fibers to pull apart. It is then pounded using a rectangular rock with finger grooves until the pulp is evenly spread out in the shape the paper-maker wants.The sound of people pounding pulp into paper can be heard echoing off the hills around the town of San Pablito in the Sierra Norte in Puebla.The color and grain of the paper depends on the bark used to make it. The typical coffee color comes from the Jonote tree (ficus family), white from the Xalama Limón, and the silvery beige color from the Mora (mulberry family), to name just a few varieties. Years of practice let the Otomí artisans make different sizes and thicknesses - from poster-board to crepe-paper weight.The paper is dried in the sun on the same boards where it is pounded and shaped.

VTG Mexico Mexican Tree Of Life Can...
$75
See all