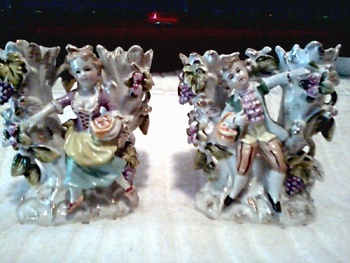 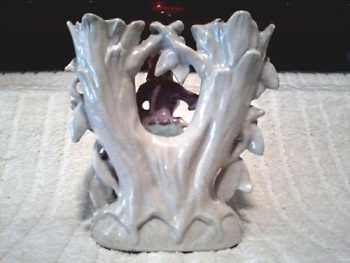 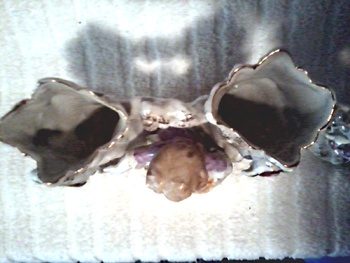 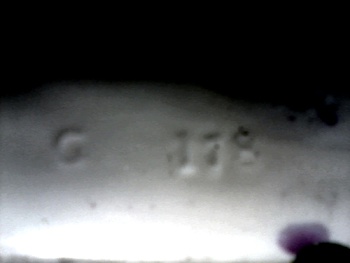 I saw these at "Volunteers of America" and hemmed and hawed over them. I put them back on the shelf together, but way in the back. I went there the next day thinking no one would have bought them, till I saw only one. Who would buy just one !!! I looked and looked and there on the very bottom shelf I found the other one. Whew !! Why do I do this to myself ! I should just buy the darn things when I see them. Anyway. They look like your typical Dresden or Meissen but I know they aren't .They measure 6" tall x 5 1/2" wide. A little too well done to be Japanese. So I'm thinking German just a lesser quality. Nice gilding and paint work ,no visible damage all the little fingers intact. Just a rough spot on one of the leaf backs of one of them. Quite nice for what they are. -Mike-

Just found out that this style is actually called a "spill vase" although you could use them for flowers as well. Here's the online definition:
" Spill vases were small, usually porcelain, receptacles, to hold splinters or paper tapers that were lit from a hearth fire to transfer a flame to light a lantern or lamp. Most were figurines and sat on a fireplace mantel. The splinters were called "spills" and were used until matches were invented after the turn of the 20th century."